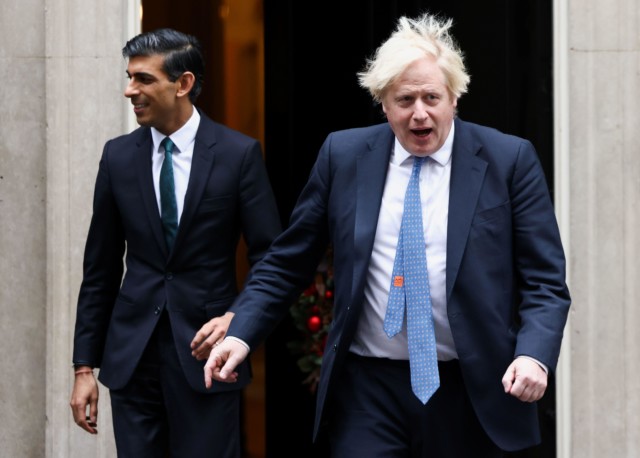 BORIS Johnson’s Partygate woes have burst back into the open following the Met’s bombshell decision today to fine him and Rishi Sunak.

After riding high for staring down Putin, the PM once again finds himself under fire from enemies at home demanding he quit for breaking the law.

The PM and Chancellor will both received fixed penalty notices Credit: Alamy
Boris Johnson was today told he will be fined by the Met over Partygate

Russia’s invasion of Ukraine had pushed the Partygate saga into the background and allowed the PM to claw back vital support from MPs.

But Scotland Yard’s decision to hand him a fixed penalty has burst the furore back under the spotlight and ramped up the pressure.

As Downing Street is thrown into a tailspin, here are the scenarios that could unfold.

After becoming the first sitting PM in history to have broken the law, Mr Johnson could choose to throw in the towel. Rather than enduring weeks of battling to keep his job, the father of two young kids may decide he does not want the fight and pack it in.

Similarly, he could find himself in breach of the ministerial code for telling MPs that “no rules were broken” over Partygate.

Deliberately misleading Parliament is a resignation offence and – despite being a political Houdini – the PM could this time see no way out.

While possible, this seems an unlikely outcome. Tory MPs giving their snap reaction to HOAR felt Mr Johnson would dig in.

Rishi Sunak was not expecting to be fined over Partygate and will be upset that the Met found he broke the law.

He briefly attended a No10 birthday bash during lockdown but was said to be merely passing through the room.

While once Boris’ natural heir who appeared to walk on water, his fine comes after questions about his personal wealth left him on the ropes.

The week from hell exposed his wife’s non-dom status just after the Chancellor hiked taxes for ordinary Brits.

Billionaire heiress Akshata Murthy, his publicity shy wife, was thrust into the public glare as she decided to repay millions in tax.

With his leadership hopes fading fast, Mr Sunak could call it a day.

Before Partygate was eclipsed by the Ukraine crisis, a steady stream of Tory MPs were filing letters of no confidence to Sir Graham Brady.

That was stopped by Russia’s invasion – with some even withdrawing their letters –  as the PM mended bridges with his backbenchers and tensions cooled.

Today’s developments could reignite the flow of letters and even tip the number above the 54 threshold that would trigger a leadership vote.

With local elections looming, Tories may feel they need a change of leader to avoid a pasting at the polls.

Mr Johnson previously made clear he would fight any confidence vote and has been working on a charm offensive of would-be mutineers.

But the strength of feeling could be so much that Tory MPs decide on a clean break.

The PM will likely try to weather the storm and live to fight another day.

After leading the global response to the Ukraine crisis, he could rally Tory MPs behind his leadership, apologise and soldier on.

The last thing he wants is a legacy of quitting under the cloud of law-breaking in high office.

Many Tory MPs and Boris loyalists think Putin’s barbarism has thrown Partygate into sharp focus that there are more important issues at stake.

Is Louises baby okay in EastEnders? BBC bosses have confirmed she will go into...