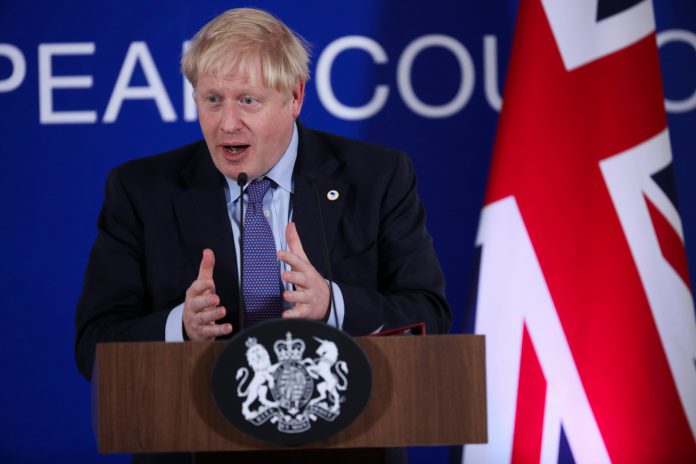 BORIS Johnon today unveiled a fresh workers rights package in a last-ditch love-bombing of Labour MPs to get tomorrow’s crunch Brexit vote over the line.

The PM also promised to protect current EU environment standards by enshrining animal welfare and climate change regulations in UK law to ensure they are not lowered after Brexit. Among the concessions designed to win over wavering Labour MPs, No10 pledged to hold a legally-bindingvote on the final EU trade deal the UK strikes with the EU.

It effectively gives MPs a veto on any move to depart from EU standards on workers rights and environmental standards.

Eight Labour MPs have today declared or told The Sun they will vote for the deal.

But No10 hoped the three-pronged move would be enough to win over around a dozen extra Labour MPs and independents that the PM needs to win todays crucial Commons vote on his deal.

In the package are commitments to improve unfair dismissal protections by reducing the qualifying period from two years to one year, and also to tighten up employee terms and conditions following a business takeover.

And the PM also offered assurances on animal welfare standards – promising not to allow UK farmers to be undercut by unfair competition from countries such as the US through lower standards such as chlorinated chicken in post-Brexit trade deals.

But Labour MPs were being threatened with deselection by Momentum boss Jon Lansman if they vote for the PMs deal today.

At the same time as love-bombing Labour MPs the Government was fiercely lobbying the 28 hardline Brexiteer MPs who voted against Theresa Mays deal on all three occasions.

They fear the deal wont pass unless they reduce the number among these so-called Spartans to fewer than two or three. As of last night there were 17 who had yet to declare or give any indication which way they will vote.

The Brexiteer ERG group of Tory MPs will hold a final meeting in Parliament this morning to decide which way to go.

The PM was also counting on 20 of the ex-Tory rebels he sacked to back his deal but despite winning the majority over there were still up to six – including Philip Hammond – who had yet to confirm they would back the deal.

In a sign of the personal animosity among the group towards the PM, one of them insisted Downing Street needed to make amends before they would back the deal.

The senior MP told The Sun: They havent reached out to me, so they can f*** off.

But the PM was being stretched by both ends of his party, with Brexiteers demanding he give legal guarantees that Britain could still leave on a No Deal Brexit by the end of next year while at the same time the ex-Tory rebels demanding a legal assurance on the exact opposite.

But the PM was given a rare boost by a Lib Dem MP as ex-minister Norman Lamb told The Sun he was considering voting for the deal and will decide this morning.

The numbers were still looking ominous for No10 this afternoon as Mr Johnson addressed his Cabinet for the final time before todays historic vote.

His chief whip Mark Spencer scrupulously avoided giving any numbers according to one of those present.

On Wednesday the chief whip told Cabinet that the Government was on course to win by one vote with the support of the DUP – before relations with their Ulster allies completely broke down on Thursday.

But the Ulster unionists stood firm in their opposition to the deal yesterday and rubbished suggestions they could let Mr Johnson off the hook by abstaining in the vote.

All contact has been cut-off since the PM went ahead with the deal without their backing on Thursday. A No10 source said: Those conversations are over. Theyre done. Shaughna and Luke M will couple up in an unbeatable relationship and win Love...

Boris Johnson under ANOTHER investigation over his £15,000 Christmas holiday to the Caribbean