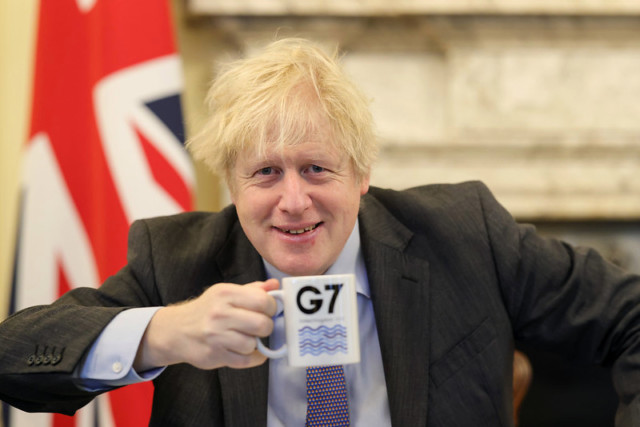 BORIS Johnson has vowed to work “hand in hand” with Joe Biden on the fight against Coronavirus and climate change – as a senior Cabinet minister declared it’s now time to “move on” from the chaotic Donald Trump era.

The PM said together Britain and America can lead the world in the effort to “build back better from the pandemic” and that the pair will to “join forces to protect our planet”. His remarks came ahead of Mr Biden’s official inauguration as US President at 5 pm today, at a ceremony in Washington.

Tight security is expected following the storming of the Capitol building by Trump supporters.

The new White House incumbent’s first trip outside of North America is expected to be to Britain, when he is due to attend the G7 summit which is being held in Cornwall in June.

In a statement last night to celebrate Biden’s swearing in, the PM said: “I warmly congratulate Joe Biden on his historic inauguration as 46th President of the United States and look forward to working closely with his new administration as we defeat Covid and build back better from the pandemic.

“In our fight against Covid and across climate change, defence, security and in promoting and defending democracy, our goals are the same and our nations will work hand in hand to achieve them.

“I look forward to welcoming him to Carbis Bay for the G7 and Glasgow for COP as we join forces to protect our planet.

“Only through international cooperation can we truly overcome the shared challenges which we face.” Biden and his wife, alongside his soon-to-be Vice President, Kamala Harris Biden and his wife ahead of the inauguration today

Home Secretary Priti Patel today predicted that the special relationship will prove to be “stronger than ever” and hailed the “new political era” ushered in by Mr Biden’s win.

She said the UK and US have an “exciting agenda” to pursue together on the world stage and declared that “we move on now” from the Trump presidency.

No 10 wants to reset relations with Washington and boost trans-Atlantic cooperation on international affairs following four years of largely isolationist US policies.

Lord Sedwill, who served as Cabinet Secretary from 2018-2020, said the PM would be secretly “relieved” that that Mr Trump lost November’s election.

He said: “Those of us who regard ourselves as close American allies have badly missed US leadership over the past four years.

“With Brexit accomplished and the Biden administration ready to re-engage, this is the moment for ‘Global Britain’ to step up.” A separate march for Trump is expected But Dame Karen Pierce, the UK’s ambassador to the US, said other Western countries may miss the outing president’s unpredictable style when it comes to dealing with countries like Russia and China.

She said: “There’s certainly something about the predictability, but I wouldn’t like to give the impression that unpredictability in foreign policy is universally bad.

“There were certain things about the way President Trump, did business that made it harder for certain quarters, the Russians would be one, to second guess him, and that sometimes has a utility.”

Zara McDermott sent a naked selfie before she’d even kissed a boy after being...