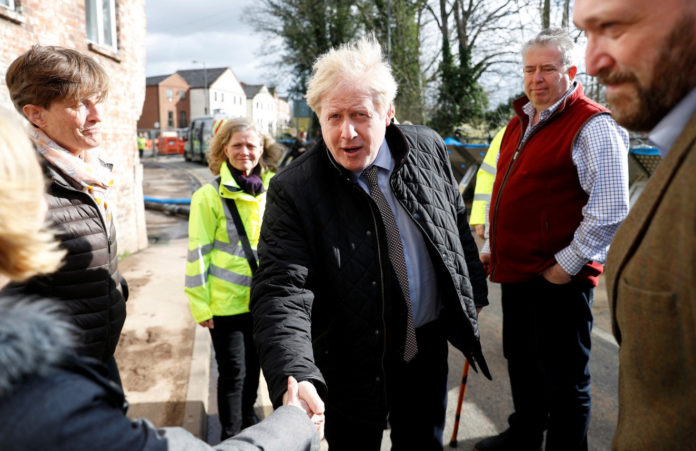 BORIS Johnson was heckled with shouts of “traitor” today as he finally visited a flood site after announcing a £5billion boost.

It is the PM’s first visit to anywhere affected by floods since the extreme weather began battering Britain last month.

Bewdley has been among the worst-hit areas in England following the wettest February on record.

The visit was far from plain sailing for Mr Johnson, who was repeatedly heckled as a “traitor” as he arrived to the town.

Another resident defended the PM, saying: “We’re just glad to see him eventually”.

He was taken to view the still-erected flood defences by Environment Agency staff.

Mr Johnson said he would “get Bewdley done” as he spoke to residents affected by the floods.

He said he was “so sorry to hear it” when he heard homes had been overwhelmed by as much as 2ft of water.

The PM spoke to the Environment Agency and said they discussed “what permanent defences can we put in and what’s the business case”.

He added: “What we’re doing is we are doubling the funding for flood defences to £5.2 billion and we’re also going to be looking at all the things we can do upstream.”

His visit came on the same day Chancellor Rishi Sunak pledged to double funding for flood defences to £5.2 billion.
The investment will help to build 2,000 new flood and coastal defence schemes and improve protections at 336,000 properties across England over the next six years.

Mr Sunak said: “Communities up and down Britain have been hit hard by the floods this winter, so it is right that we invest to protect towns, families, and homes across the UK.”

During a TV appearance this week, Mr Johnson claimed he had been told to stay away from flood sites to avoid distracting from the recovery effort.

He said: “They said to us, all you’ll do is just distract us and disrupt the business of helping people with the immediate crisis.

“I’m obviously working round the clock on all types of things, as the Government is on the flooding.

“What we’ve been doing is making sure that homeowners get the support that they need.”

Inflation soars to 9 per cent as Cabinet split on how to help Brits...