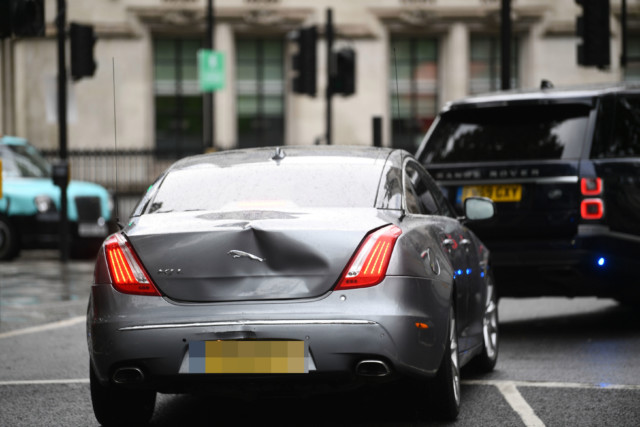 BORIS Johnson was involved in a minor crash this afternoon after a protester ran in front of the PM’s convoy.

Video from the scene shows a man jumping in front of the cars as they left the House of Commons this lunchtime after PMQs – with the PM inside.

The PM was involved in a small car crash earlier A Kurdish demonstrator was detained by police

Noone – including the PM himself – was hurt as a result of the bump.

After the protestor ran into the road, the front car then stopped suddenly, forcing the one behind to hit it.

As the car pulled away a large dent could be seen in the front vehicle.

The PM was leaving the House of Commons after having a clash with Labour boss Sir Keir Starmer in Parliament for their weekly PMQs session.

The PM is driven through into Parliament and back to No10 because of security reasons. Police officers detain a protester near the Houses of Parliament, in London He had to be escorted away by four officers Martin Lewis warns workers to check tax codes NOW – and you could be...

I’m a debt expert – four things you should if bailiffs come to your...