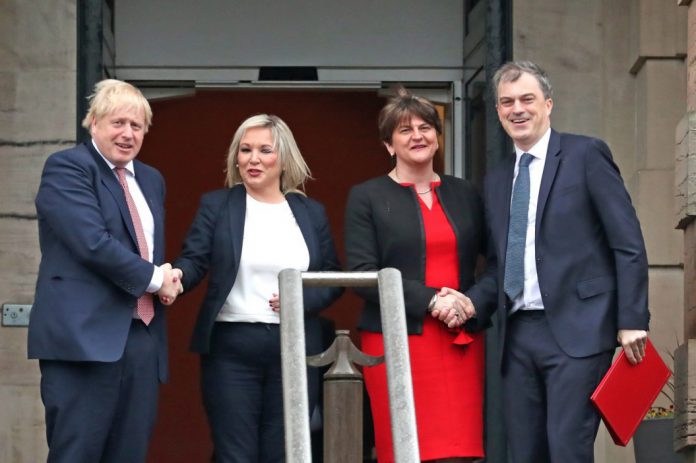 The Prime Minister is set to meet with the DUP and Sinn Fein leaders in Belfast today – and will meet with the Irish PM Leo Varadkar too.

It comes three years after the Government in Northern Ireland collapsed, sparking political deadlock and stalemate from both sides.

The PM said it was “an historic time for the people of Northern Ireland”.

He added: After three years, Stormont is open for business again with an Executive who can now move forward with improving peoples lives and delivering for all communities in Northern Ireland.

It’s claimed the province could get up to 2billion in Government cash as part of the deal.

Speaking to BBC Radio 4 today, First Minister Arlene Foster said: We need resources not just for one year but for several years so we dont fall off a cliff edge, as well as capital investment.

“We have a huge hole in our infrastructure we need to fix.”

Northern Ireland’s creaking health service is on the verge of collapse, with tens of thousands of people on hospital waiting lists for more than a year.

And it’s been made worse by a recent nurses strike, too.

A huge chunk of the cash is expected to go direct to the NHS, and was a key part of getting the parties back in government.

However, Mr Johnson is tipped to face a backlash from his own backbenches over a part of the deal that sees a unit set up to look into unsolved murders during the Troubles.

This could lead to the prosecution of former British servicemen who served in Northern Ireland.

The government had previously vowed to end vexatious claims against former servicemen by amending the Human Rights Act.

FIFA 23: All the new ratings for Manchester City in FIFA 23