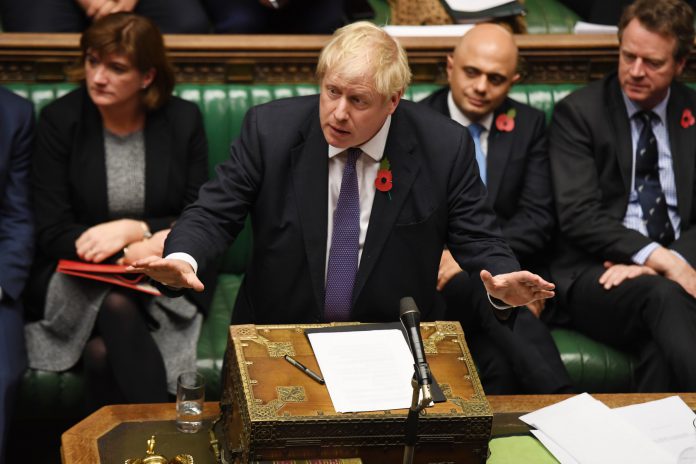 BORIS Johnson has promised to abandon his Brexit Bill this year to woo over MPs for a fourth Christmas election bid tonight.

The PM’s latest attempt to force a festive poll was torpedoed by Jeremy Corbyn and his MPs last night, making it short of the 434 MPs needed to get it through. Boris will this afternoon bring back a short bill to Parliament instead with the hope of attracting the SNP or Lib Dems to vote for it.

Unlike previous election votes it will only need half of MPs to back it, not two-thirds.

But it will be more of a struggle to get it through as MPs can try and change it with amendments on votes for 16 year olds, or a second referendum.

The Government and opposition MPs are now in a furious fight over which date is best for a snap poll to take place.

The PM told MPs last night: “This House cannot any longer keep this country hostage. I don’t believe this paralysis should be allowed to continue

“It’s time for voters to replace this dysfunctional Parliament with a new Parliament that can get Brexit done.”

But Boris is clinging to the December 12 polling date which opposition MPs are hell-bent against, as he’s determined to give his Brexit law one more try before Christmas.

Lib Dem leader Jo Swinson and the SNP’s Westminster leader Ian Blackford want an election on December 9 instead – which would mean Boris’ Brexit Bill will have to be binned for now as it would run out of time to pass.

Mr Blackford said he won’t back the new plan unless the PM guarantees that he won’t try to ram his bill through as well.

And Ms Swinson warned she may not back it at all if the PM sticks to December 12.

“Instead he has chosen to stick to his original plan for December 12 which we have already rejected.”

Mr Corbyn said Labour would “look at the bill tomorrow (Tuesday)” and decide whether to back it – but only if the PM promises No Deal is taken off the table.

Yesterday’s extension news means the PM’s “do or die” promise to leave the EU by October 31 has now been completely shattered.

Boris refused to resign for breaking his promise, or say sorry, despite saying he would rather be “dead in a ditch” than accept an extension.

It means Britain will be in the EU until January 31 now, or could leave sooner if a deal is passed before then.

What is X Factor The Band, how can I audition and whats the prize?

Why is Coronation Street not on ITV tonight?