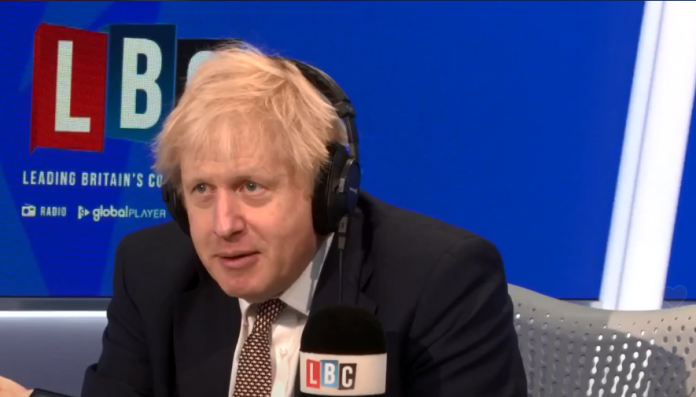 BORIS Johnson has refused to confirm whether he’ll appear on the BBC for a grilling from veteran broadcaster Andrew Neil.

The PM answered a raft of questions from voters this morning on LBC – with just 13 days to go before the December 12 election.

Last week Jeremy Corbyn was ripped to shreds by Mr Neil in a half an hour interview, but Boris dodged questions on whether he will do the same.

He told presenter Nick Ferrari: “I am much happier to talk about my policies, rather than endlessly going on about the media.

“What people really want to hear is what we are doing to take the country forward.”

The grilling comes after the PM was blasted for not attending a Channel 4 climate change debate last night.

But Boris insisted that “I can’t do absolutely everything” and the Conservatives have a “fantastic record on climate change”.

Micheal Gove tried to take part in his place but the other candidates refused to have him.

An ice sculpture was put in his place instead, but Boris said it was a “shame” that was discussed more than climate change was.

Elsewhere in the interview:

The PM has been accused of putting the NHS up on the table for trade talks by Jeremy Corbyn, which has repeatedly denied.

Today he insisted that the health service is “not for sale” at all under “any circumstances”.

“If the US or any other country to insist on that being a condition of talks, we would simply walk out.

“It is perfectly obvious that if any party were so mad as to go down that route, they would never be elected.”

Single mum Ruth rapped the PM for comments he made about single mums 25 years ago, calling them “uppity and irresponsible”.

“Why are you happy to criticise people like me when you refuse to discuss your family?” she said.

But Boris insisted he meant “no disrespect to you or anybody” and they were “written before I was even in politics”.

He added: “The quotations used are absolute distortions of what I say and what I think.”

The PM also tried to convince a nurse named Janet to stay in the NHS.

She failed to be swayed, and told him: “This has done nothing to convince me to go to work on Monday, not at all.”

Boris also refused to answer repeated questions about his family life, saying it wasn’t what voters wanted to talk about.

Mr Ferrari probed him, asking: “How many children do you have?

“Are you fully involved in all their lives?

“Can you tell me there’s not another Johnson on the way?”