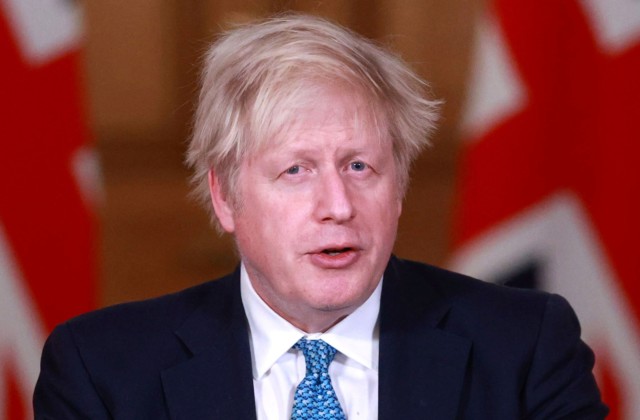 BORIS Johnson revealed today that 1.3million people have now had the Covid vaccine – with a quarter of all those over 80 having received their first dose.

The PM promised today daily updates on the number of people who have had the vaccine to keep the nation in the loop on the fight against the virus.

Boris Johnson revealed 1.3million have had the vaccine by now – and nearly a quarter of the over 80 category82-year-old Brian Pinker receives the Oxford University/AstraZeneca COVID-19 vaccine yesterday He attempted to reassure Brits that his plan to vaccinate everyone was on track, just hours after he ordered everyone to stay at home.

Speaking this evening, he promised that the Government’s new strategy to give out as many first doses as possible was the right one – and would save lives.

He said: “With Pfizer and Oxford/AstraZeneca combined – as of this afternoon – we have now vaccinated over 1.1 million people in England and over 1.3 million across the UK.

“And that means that nearly 1 in 4 of one of the most vulnerable groups will have in 2 to 3 weeks – all of them – a significant degree of immunity.”

He said that it was vital to consider the importance of the huge progress so far.

The average age of Covid fatalities is in the 80s, he added.

He appeared alongside Chris Whitty and Patrick Vallance this evening, who revealed that one in fifty people now have Covid – more than one million Brits.

In England alone, some 27,000 people are in hospital with COVID, 40% more than during the first peak in April.

Boris has promised to get jabs to the 13million most vulnerable people in Britain by the middle of February.

It will start with people in care homes, followed by all those over 80, then more NHS workers.

After that the over 75s will get the jab, and then those who are clinically extremely vulnerable and who have had to sheild. One in 50 people across the UK now have the virus More people are dying who have had a positive coronavirus test, despite the increase

Only after that batch of people are vaccinated will he consider lifting lockdown measures.

At the moment just over a million have been done.

The NHs needs to reach two million people a week to reach the PM’s goal, but only 300,000 are currently being given out at the moment.

The efforts will be ramped up with more vaccination centres coming online this week – and with the rollout of the Oxford jab to GPs it will be easier to do.

The lockdown will legally kick in tonight at midnight, but people have been told to start staying home from today.

But it may be extended into March if the vaccine rollout is too slow, Michael Gove warned today.

The Cabinet minister insisted that the Oxford and Pfizer jabs were the key to the lockdown ending.

Mr Gove said today that the lockdown may have to continue if the deadline is not met.

Progress would be reviewed in the final week of lockdown – the 15th of February – but March was the point at which restrictions would likely be lifted, he said. He told Sky News: “We can’t predict with certainty that we will be able to lift restrictions in the week commencing February 15-22.

“What we will be doing is everything that we can to make sure that as many people as possible are vaccinated, so that we can begin to progressively lift restrictions.

“I think it is right to say that as we enter March we should be able to lift some of these restrictions but not necessarily all.”

Restrictions won’t all be lifted at once, with them “progressively” loosened, he added.

And it was the new variant – which is between 50 and 70 per cent more transmissible – which has forced him to act.

Mr Johnson said people will only be allowed out of their homes to buy essential food and medicine supplies, attend medical appointments, exercise, work if it is critical and cannot be done from home and to provide care for a vulnerable person. He also told the nation:

Police will have legal powers to enforce the rules but fines will not be increased despite a drop in compliance.

Free school meals will continue to go to those who need them as schools stay shut, and more laptops will be dished out to kids across the nation who haven’t got the ability to learn online at home.

And holidays will effectively be cancelled as people have to legally remain at home. EastEnders spoilers: Peter Beale devastated to discover dad Ian has cut him out of...