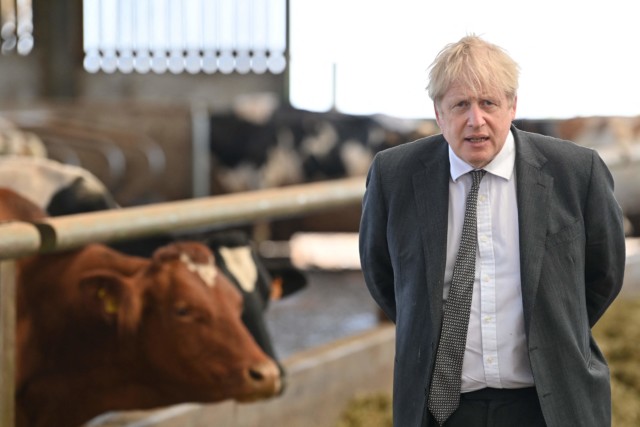 BORIS Johnson has said Britain has a “very good chance” of “opening up totally” on June 21 despite third wave fears.

The PM warned there will “probably be another wave” of Covid in the UK, but our smashing vaccine rollout will provide “robust fortifications” against it.

Boris said today there would unfortunately be more cases of Covid, but that the vaccine would provide huge protection against it

He said on a campaign visit yesterday that it was unfortunately likely that cases will go up as the nation is unlocked and we have “got to be realistic about it”.

But in better news, cases of Covid are “currently very low” along with the number of people in hospital, he added.

And he said that “as things stand I think we’ve got a very good chance of really opening up totally on June the twenty-first” – when he hoped to lift all rules.

The PM hasn’t yet confirmed things can go back to normal, but ministers hope to lift all Covid rules by June 21.

It’s hoped that will mean no limits on social life anymore, with life able to open up properly.

It will mean nightclubs can finally reopen after more than a year shut – and no more limits on weddings or funerals.

Speaking on a visit to Wales yesterday, the PM said: “But I think the vaccination programme has been so massive… that we’ve built up some, what I think, are pretty robust fortifications against the next wave.

“We’ll have to see how strong they really are in due course.”

He urged everyone to come forward and get the vaccine as soon as they are asked – as it was revealed today that people over 42 can now come forward to get theirs.

It comes as the PM was accused last night of saying he would rather see “bodies pile high in their thousands” than order Britain back into lockdown a third time.

The PM allegedly made the remarks after being told he had no choice but to put the country back under harsh restrictions last October.

But Downing Street and the PM came out to formally deny the claims.

He said when asked if he had said those words: “No, but I think the important thing that people want us to get on and do as a government is to make sure that the lockdowns work, and they have.”

Downing St has strongly denied that he ever said such a thing describing the claims, reported by the Daily Mail, as “just another lie”.

The Defence Secretary Ben Wallace said the reports were the “comedy chapter” of “gossip stories”.

He added that they were “not true” and had been “categorically denied by practically everyone”. The revelations come amid an increasingly vicious war of words between the PM and his former top aide, Dominic Cummings.

No.10 also suspects he was behind the leaking of text messages between the PM and James Dyson that sparked a lobbying scandal.

One source said: “Dominic is engaged in systematic leaking. We are disappointed about that.

“We are concerned about messages from private WhatsApp groups which have very limited circulation.”

The source added the PM was “saddened” by the developments and said Mr Cummings was “bitter” after his exit from Downing Street.

Mr Cummings, who quit as No.10’s chief adviser last year following an internal power struggle, denies being behind any of the leaks.

But it has been reported he has audio recordings of sensitive conversations he had with top ministers and officials in the administration.

He will appear before a parliamentary inquiry into the Government’s handling of the Covid crisis next month.

Coronation Street star Kym Marsh says she WILL be coming back to the soap...

Prince Harry was destined to fall for a spiky, spicy woman like his mother...

People FINALLY able to stay with grandparents as sleepovers allowed – but only with...