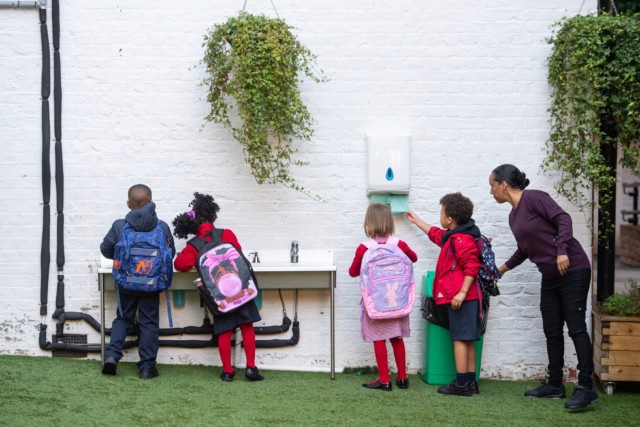 BRITAIN is getting back on its feet, Boris Johnson declared last night.

The Prime Minister hailed the huge numbers of Brits returning to work and school. As millions of children headed for classrooms, an enthusiastic Mr Johnson thanked teachers, pupils and parents in playing their part for this “incredible country”.

And he vowed to do absolutely everything in his power to help get more workers back to their desks, insisting there would be no extension to the furlough scheme.

Although warning there would be “more wretched Covid to come”, Mr Johnson said he was “absolutely confident” Britain was on the road to recovery despite worrying images of empty commuter trains amid a sluggish return to towns and cities.

Downing Street was unable to supply data on how many were back at work but more than 40 per cent of schools were finally reopened yesterday.

And the Cabinet was back in Westminster for their first meeting since the summer break.

The PM addressed a gathering of his top team around a socially distanced Cabinet table in the ­Foreign Office building.

He said: “This is the first day back for us but across the country hundreds and thousands, millions of pupils are going back to school thanks to the huge efforts their teachers, their parents have made over the last few days and weeks.

“People are going back to the office in huge numbers across our country and quite right, too.

“Bit by bit, this incredible country is getting back on its feet and recovering from this crisis.

“We, in this Government, are committed to trying to do everything in our power to help. That’s what we have been doing over the last few months, and that’s what we’re going to continue to do.”

But Mr Johnson warned: “Of course, we know that there is still going to be more of this disease, this wretched Covid, still to come.

“We know there will be more outbreaks — and we are absolutely confident that we are going to be able to deal with those outbreaks.”

After a torrid summer of U-turns, he used the first meeting to try to justify the chaos over free school meals, exam results and masks in schools.

He told his ministers: “In the last few months, we’ve been sailing into the teeth of a gale, no question.

“But we have been going steadily in the direction, in the course we set out, and we have not been blown off that course.”

Yet, he insisted there would be no U-turn over the end of the furlough scheme which begins to wind down this month, despite pressure from MPs to extend it.

The Job Retention Scheme set up in March paid furloughed workers 80 per cent of their wages from the public purse.

That drops to 70 per cent this month and then 60 per cent in October before its planned conclusion on November 1.

Labour and some senior Conservatives are calling for an extension to the scheme.

“Germany, which knows all about retaining domestic industrial strength, has just decided to continue its furlough scheme for another 12 months.”

But last night the Treasury firmly slapped down the calls to extend the scheme.

And Chancellor Rishi Sunak’s firm stance was backed by Mr Johnson who said: “We have been clear that we cannot sustain the situation indefinitely.

There isn’t any change to the position.” People travel through Waterloo station in London during rush hour

His official spokesman added: “By the time the furlough scheme ends, we will have paid wages for eight months saving 9.6 million jobs.”

The Treasury said: “The end of the furlough scheme is not the end of our support for jobs. For businesses that can successfully bring furloughed employees back to work, this includes a £1,000 job retention bonus.”

But the Institute for Public Policy Research think tank said ending the arrangement too quickly would be “an historic mistake”.

It added: “Reforming and extending the scheme now could prevent jobs losses and boost the economy in this time of need.”

The Treasury will today launch a £2billion Kickstart scheme to help the young unemployed into work.

Employers can offer those aged 16 to 24 a six-month work placement even if they are claiming Universal Credit.

The Treasury will pick up the wages, taxes and pension contributions in the hope it will help to create new full-time jobs.

Unveiling the plans, Mr Sunak insisted: “This is not just about kickstarting our country’s economy, it is an opportunity to kickstart the careers of thousands of our young people who could ­otherwise be left behind as a result of the pandemic.

“The scheme will open the door to a brighter future for a new generation and it will ensure that the UK bounces back stronger as a country.” Roblox Adopt Me: Will I lose my login streak after today’s outage?

I’m a mum and I’m worried Christmas will be ruined after Mars said it...

Ekin-Su and Davide work up a sweat in the gym ahead of ‘explosive’ Love...