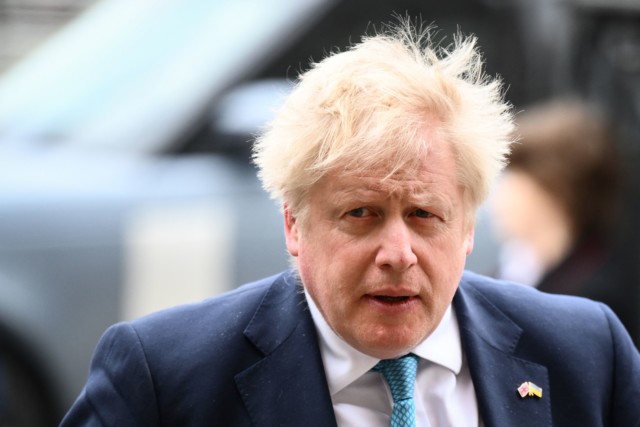 BORIS Johnson must not resign even if he is fined for Partygate, a Cabinet Minister said for the first time today.

Welsh Secretary Simon Hart said his constituents do not want heads to roll over the saga and the PM should not be “automatically sacked” for a mistake.

Boris Johnson should not resign if fined over No10 parties, a Cabinet colleague has said
Welsh Secretary Simon Hart urged the PM to fight on

Cabinet colleagues have so far refused to offer their unwavering support and are biting their tongues until the Met probe wraps.

Mr Johnson was not stung by Scotland Yard’s first tranche of 20 fixed penalty notices for flouting the rules during lockdown but is still in the danger zone.

In a major vote of confidence this morning, Mr Hart said it should not be a fatal blow if cops also hand one to the PM.

He said the “vast majority” of his constituents “want contrition and they want an apology, but they don’t want a resignation”. He told Sky News: “I trust the views of the people who elected me in saying that look, put this problem right, make sure you apologise, you acted inappropriately at the time.”

But the idea that every politician or indeed every journalist for that matter who makes a misjudgement along the way should automatically be sacked is not something I subscribe to.”

Mr Hart also warned that a “six-week, self-indulgent” Tory leadership race was the last thing the country needed as the Ukraine war rages.

Jacob Rees-Mogg today refused to answer “hypothetical questions” when also asked if the PM should resign over Partygate.

But the Brexit Opportunities Minister did call the draconian rules at the time – which banned social gatherings – “inhuman”.

He told LBC: “What I think is fundamental is that we look in the (Covid-19) inquiry at how the rules were devised and the effect that they had, because I think some of those rules were inhuman.”

Rishi Sunak last week batted away questions over whether the PM should resign if fined.

Downing Street has promised to own up if Mr Johnson or top civil servant Simon Case are fined.

The Met is refusing to reveal the identities of more junior officials who have been given a fixed penalty notice.

But former government ethics chief turned Premier League exec Helen McNamara has been fined for a party, the Telegraph reported.

And some of the fines already dished out relate to the parties in No10 on the eve of Prince Philip’s funeral.

Did you miss our previous article…
https://www.hellofaread.com/politics/promised-clampdown-on-google-and-facebook-from-lifting-stories-from-newspaper-without-paying-delayed-by-two-years/

Is The Last Of Us HBO show based on the video game?

Meghan Markles friend ordered to remove damaging photos of the duchess she was using...

Holly Willoughby fights back tears as they give disabled winner an extra 1k and...