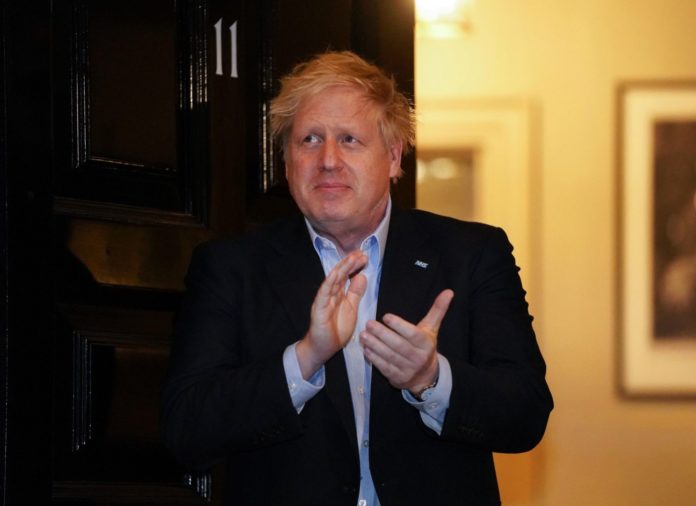 BORIS Johnson is now sitting up in bed and his condition is “improving” as he battles coronavirus in intensive care, the Chancellor said this evening.

The PM, 55, is not on a ventilator and is continuing to be looked after in St Thomas’ hospital in South London. Dominic Raab paid tribute to his friend Boris, hailing him as a ‘fighter’

He is “clinically stable” and being well-looked after, No10 said this afternoon.

And the Chancellor gave more good news about the PM’s condition at tonight’s press conference.

Rishi Sunak told the nation: “The PM remains in intensive care where his condition is improving.

“He is sitting up in bed and engaging positively with the clinical team.”

The news will be a good sign that the PM will not need to be put on a ventilator to help him breathe.

He has been getting oxygen treatment for the past few days to help his lungs.

No10 said today: “The PM remains clinically stable and is responding to treatment

“He continues to be cared for in the intensive care unit at St Thomas’ Hospital.

“He is in good spirits.

“The PM is receiving standard oxygen treatment and not needing any other assistance.”

Boris is no longer doing any work from his hospital Downing Street said today.

Last night was hailed as a “fighter” and the Queen led the world in sending him messages of support.

Despite initial fears, doctors at London’s St Thomas’ Hospital decided there was no need to put him on a ventilator and sedate him.

Tests results yesterday also revealed he does not have pneumonia. But his doctors are still keeping him in ICU “for close monitoring”.

And last night The Times reported that the stricken PM’s persistently high temperature had fallen in the first sign he might be beating the disease.

But No10 refused to comment on the claims, or say whether he is taking part in any experimental coronavirus drug trials.

Medical experts have predicted that Mr Johnson may need several weeks off work to recuperate from his ordeal once he is able to leave intensive care.

The PM has no contact with the outside world apart from brief messages relayed by doctors since going into ICU. He has been stripped of his two mobile phones.

No10 aides dismissed rumours that Mr Johnson has an underlying health condition and insisted that he has lost weight since hitting 17st when he was Foreign Secretary.

The news of Mr Johnson’s progress came as:

The Queen led the Royal Family’s well wishes to Boris as world leaders praised his fortitude.

Buckingham Palace said Her Majesty sent a private message to the PM, his pregnant fiancée Carrie Symonds, 32, and his wider family.

The Palace spokesman added: “Her Majesty said they were in her thoughts and that she wishes the Prime Minister a full and speedy recovery”.

Prince William said: “Our thoughts are with the Prime Minister and his family, who like so many in the UK and around the world are affected by coronavirus.

“We wish him a speedy recovery at this difficult time.” Mr Johnson was moved to intensive care after his symptoms worsened Both Mr Raab and Professor Whitty stressed that Britain needs to reach the peak first before looking at whether the lockdown measures can be changed or relaxed.

Professor Whitty said: “It’s really important we get to the point we are confident we are beyond the peak. There are a large number of different things we need to take into account here.”

The peak is expected to take place this weekend but Sadiq Khan said earlier it could be up to 10 days away.

Government sources stressed earlier that a formal extension of the lockdown may not happen on Monday but would be around that date.

In the coronavirus law which was rushed through the Commons last month, it says the Health Secretary must review the lockdown measures by the 16 April at the latest – next Thursday.

Ministers also sought today to quash claims that schools could reopen as soon as after the Easter break.

One minister claimed it might help to kick-start the economy.

But this evening Government sources stressed it would not happen until the rest o the lockdown was lifted.

And they said it was very unlikely to happen after the bank holiday break.

It was yesterday decided that Mr Raab, who is also First Secretary of State, will not give the Queen the PM’s usual weekly updates. She will in- stead wait for Mr Johnson’s return.

On his first day as stand-in PM, Foreign Secretary Dominic Raab held a video conference meeting with the rest of the Cabinet this afternoon.

He promised Mr Johnson that the Cabinet will not “blink or flinch” in the nationwide fight against Covid-19.

Hosting the daily No10 press conference on the virus battle, he said of Boris: “I’m confident he’ll pull through because if there’s one thing I know about this Prime Minister, he’s a fighter and he’ll be back at the helm leading us through this crisis in short order”. Mr Raab poignantly added: “As will be the case for so many people up and down the country who know someone at work who has fallen ill with coronavirus, it comes as a shock to all of us.

“He’s not just the Prime Minister, and he’s not just our boss. He’s also a colleague and he’s also our friend.”

The PM’s official spokesman added: “The Government has a very clear plan to respond to the coronavirus pandemic, as set out by the Prime Minister.

“Everyone is very clear about what needs to be done.”

No10 insisted there was no cover- up over the seriousness of Mr Johnson’s condition on Monday after saying he had only gone into hospital for “routine tests”. Officials said he deteriorated rapidly later on that afternoon.

Downing Street insisted: “We have been fully frank with you throughout. We have issued you with regular updates on the Prime Minister’s health.”

It was announced that Chancellor Rishi Sunak, 39 — as the Cabinet’s next in line — will take over as stand-in leader if Mr Raab, 46, also succumbs to the virus.

Politicians from across the spectrum united to send Mr Johnson their best and offer their prayers.

Mr Cameron said: “He’s got a tremendous zest for life, for getting things done, and for leading and for taking decisions. I know he’ll want to get well and get back in charge again.”

The PM’s predecessor Theresa May also said her “thoughts and prayers are with Boris”, and wished him “a speedy recovery”.

New Labour leader, the millionaire Sir Keir Starmer, said: “All of our thoughts are with the Prime Minister and his family at this difficult time.

“This is a national crisis and the Labour Party will act in the national interest, working constructively with the government”.

Labour’s Shadow Health Secretary Jonathan Ashworth added: “This isn’t about who you voted for, he is our Prime Minister, we need him to get better to lead the country.”

It emerged today that Mr Raab cannot launch any military action unless he gets the National Security Council’s permission.

The stand-in PM’s powers are much more limited than Mr Johnson’s.

Under emergency protocols, Mr Raab must consult senior Cabinet ministers and intelligence chiefs who sit on the NSC before any new operations are launched.

They would also have to be signed off by the full Cabinet.

A senior government figure said: “He needs collective responsibility on almost anything substantial.”

Ministers refused to discuss who had taken charge of Britain’s nuclear arsenal in Mr Johnson’s absence.

But No10 confirmed that the “letters of last resort” that the PM wrote to the nuclear submarine commanders remained in place and will not be changed. The PM was admitted to St Thomas’ Hospital, the closest to Parliament and Downing Street, on Sunday evening Fiancee Carrie Symonds, 32, has also had symptoms of the deadly bug too but is on the mend National lockdown: Confused? Here’s everything you can and can’t do under ‘lockdown 2

I’m A Celeb’s Frankie Bridge opens up on ‘feud’ with Naughty Boy – and...