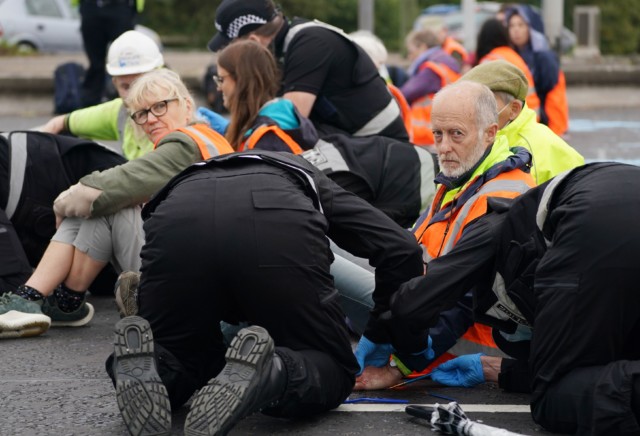 BORIS Johnson today hit out at M25 eco-protesters, saying they were damaging their own cause.

And the PM threw his weight behind tough police action to deal with their chaos and disruption.

Police officers work to free protesters who had glued themselves to the highway at a slip road at Junction 4 of the A1(M), near Hatfield,Boris lashed out at the activists for damaging their own cause Speaking out for the first time on the environmentalist extremists who have spent several days blocking key motorways around the capital, he said they “detract” from the very important “moral mission” he’s pushing.

He added: “No, I don’t think these people do any favours to their cause.

“I think what they do is detract from a very important moral mission that is widely shared by the people of this country.”

The PM is over in New York this week fighting Joe Biden for more cash for climate change swaps, to help poorer countries to develop green solutions instead.

Last week damning audits revealed that they were £20billion short of the £100bn the PM has been calling for.

He will rally world leaders to warn that more must be done to make good on their promises before his crucial COP26 climate summit in Glasgow in November.

Traffic is again backed up for miles today as protesters caused yet more chaos for travellers.

This is the fourth time the climate crisis warriors have caused travel chaos around London’s orbital and surrounding motorways – which has had serious consequences for people left stuck in the traffic.

And 41` people have been arrested this morning alone following the M25 blockage, Hertfordshire and Kent Police confirmed.

Police have now cleared Insulate Britain protesters and reopened roads on the M25 and A1(M), they said.

Last week woman was paralysed by a stroke while sitting in the traffic they caused.

The mum’s son, who was driving her to the hospital, said he was forced to “watch his mother slip away”.

Chris, whose mum is now paralysed after being forced to sit in the delays, told LBC: “I was caught up for about six hours in traffic. I was doing a mission of mercy to help my mother.”

He took it upon himself to drive his mum because of ambulance delays and the on-site doctor being his with severe delays due to traffic.

But he ended up stuck on the motorway for six hours after Insulate Britain protesters blocked the road.

He said: “I was there with my mother for six hours watching her slip away, and I could do nothing.”

“When we got her to the hospital, the doctors said if we were to have gotten to them within 90 minutes, her symptoms, her recovery would have been minimal.”

And LBC’s Nick Ferrari also bashed the eco-warriors, addressing Insulate Britain’s Liam Norton: “You’ve just heard a caller explain how he watched his mother effective drain away in front of his eyes for six hours. Don’t lecture me on emotional content.

“I’m talking to you about the suffering of Chris’ mother, which you brought about with your colleagues. That woman effectively dying in front of her son’s eyes is down to you and your colleagues.

“When are you going to stop with these lame apologies and actually accept that this is not the way to protest.”

Today, the eco-campaigners have resumed their much-criticised M25 protest and blamed police for not reducing traffic speeds.

And they have also now blocked the entrace to the A1.

Insulate Britain activists started their demonstration after 8am on Monday as the morning rush hour got underway.

LBC’s Rachael Venables said about 15 protesters in orange bibs blocked off the carriageway on a slip road, with drivers beeping their horns and traffic expected to begin backing up.

Police have arrived at the scene and started their arrests.

Hertfordshire Police confirmed that 29 people have been arrested this morning following the protest.

And Kent Police force said officers attended at 08:30am and arrested 12 people on suspicion of conspiracy to cause a public nuisance.

Hertfordshire Police said: “Police were called at 8.12am today (Monday 20 September) to reports of protestors near junction 18 (Chorleywood) of the M25, several of which were glued to the carriageway. 13 people have been arrested. The road has been partially re-opened.

“Police were also called at 8.15am to reports of protestors near junction 4 (Stanborough Interchange) of the A1M. 16 people have been arrested, the majority of which were glued to the carriageway. A diversion is in place.”

Chief Superintendent Nick Caveney said: “Protestors have made it clear that they intend to continue causing disruption. Not only is purposely blocking a highway incredibly dangerous, it also affects thousands of members of the public who are stuck in delays as a result.

“We have robust plans in place in order to minimise any disruption and to allow us to make arrests as quickly as we possibly can. This includes, but is not limited to, monitoring areas that have been identified as possible protest targets.

“Officers were on the scene within minutes of being alerted to protest activity, allowing us to put diversions in place to ease the traffic and to make numerous arrests. All protestors involved in this morning’s protests have been arrested and will be taken to custody.

“We are working closely with other affected forces to ensure that any further activity is dealt with effectively and efficiently.

“I understand and appreciate the frustration regarding the considerable delays and inconvenience that has occurred as a result of the protests.

“We have now made a total of 76 arrests in relation to protest activity across Hertfordshire over the last week. Please be assured that a full investigation is underway, and we are in the process of gathering evidence in order to ensure that those breaking the law are brought to justice.”

EastEnders reunion as Jake Wood poses for a snap with Rita Simons a week...

Britain could be set to join US’s free-trade deal with Mexico and Canada after...