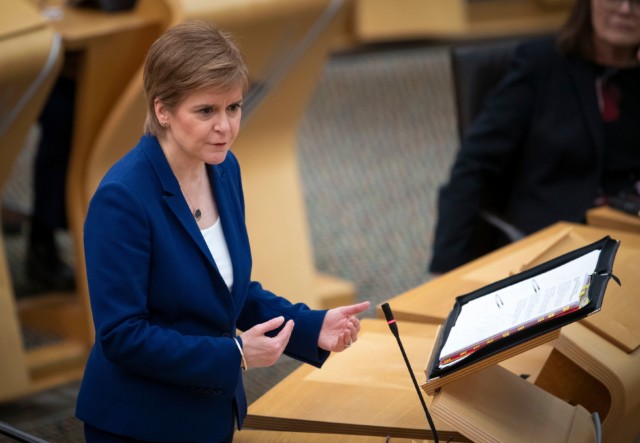 BORIS Johnson sparked a furious row with Nicola Sturgeon last night over his planned trip to Scotland – as she said his trip wasn’t “essential”.

The Scottish First minister blasted his planned visit to shore up support for the union as the SNP continue to fight to rip apart the UK with another divisive independence referendum.

Sturgeon said she wasn’t ecstatic about his visit

The PM is expected to travel to Scotland tomorrow but Ms Sturgeon said she was “not ecstatic” about the idea and urged him to set an example to the rest of the UK about staying at home to tackle the virus.

“If we’re asking other people to abide by that, then I’m sorry but it’s probably incumbent on us to do likewise.”

She insisted that she wasn’t saying he wasn’t welcome but quipped: “we have a duty to lead by example”.

“I am not and never would be saying that Boris Johnson is not welcome in Scotland – he’s the Prime Minister of the UK.

She said: “We’re living in a global pandemic right now.

“That’s why I’m perhaps not ecstatic about the thought of the Prime Minister visiting, it’s not because he’s not welcome.”

Under Scottish rules, only people making so-called “essential” journeys across the border are allowed to enter Scotland.

A spokeswoman for the Prime Minister hit back earlier today.

They said: “It remains the fact that it is a fundamental role of the Prime Minister to be the physical representative of the UK Government, and it’s right he’s visible and accessible to businesses and communities across all parts of the UK – especially during the pandemic.”

When asked about the visit in the House of Commons by SNP MP Neale Hanvey – who described the move as “futile Union Jackery” – Scottish Secretary Alister Jack said: “The Prime Minister is the Prime Minister of the United Kingdom and wherever he needs to go in his vital work against this pandemic, he will go.” HOAR revealed earlier this week he is expected to use the trip to make an impassioned plea for Scots to reject narrow separatism, and hail the benefits of being in the UK.

Downing Street want to launch a charm offensive on Scots to convince them of the many everyday benefits of staying part of the UK.

She hinted that Scotland would impose even tougher hotel quarantine rules on people coming in from ANY country in the coming days.

Priti Patel and Boris Johnson have today revealed new rules for travellers coming into the UK from abroad.

Anyone visiting from 30 hotspots will be bussed straight to a hotel quarantine facility for 10 days.

But they didn’t announce when the new rules will start. Travellers will also be stopped by cops and border police at airports to quiz them on why they are going anywhere during the lockdown.

Brits will be asked to fill out forms prior to travel and present them to anyone who asks.

But people without a valid reason will be fined or will have to head back home immediately.

Boris Johnson vows everyone in UK will be within 10 miles of Covid vaccination...