BORIS Johnson’s supporters say he has 100 backers in the Tory leadership race.

The former Prime Minister, said to be eyeing up a return to power, is expected to formally announce his bid tomorrow morning.

Boris Johnson will ‘clearly’ run to be the next PM, according to Jacob Rees-Mogg

Rishi Sunak, pictured leaving his house today, has formally entered the race to be PM 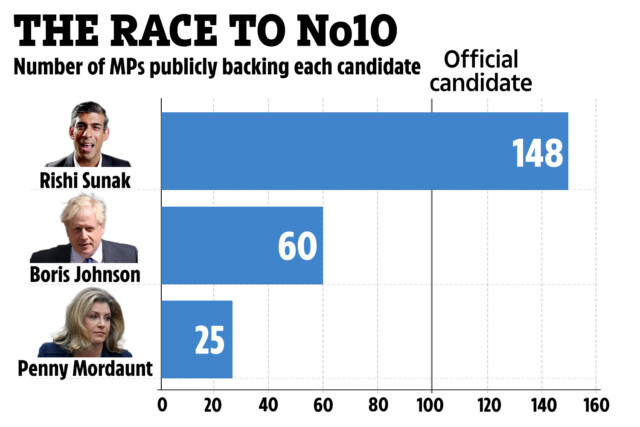 But he is said to want rival Penny Mordaunt to drop out of the running. It comes after former Chancellor Rishi Sunak officially announced his bid today.

“Thanks to all your hard work I can confirm we have completed all the paperwork (verified all nominations, with proposer and seconder) to be on the ballot tomorrow.

It comes after Mr Johnson’s supporters said he will “clearly” join the race to be the next Prime Minister.

The ex-Conservative Leader has “learnt from his mistakes” and is keen to “get everything right” the second time around, according to his core backers.

Business Secretary Jacob Rees-Mogg told the BBC that BoJo has the 100 people behind him needed to be in the contest – despite only 56 publicly declaring their support.

But Mr Johnson has reportedly urged fellow Tory leadership hopeful Ms Mordaunt to pull out and back his campaign before he does so.

A source close to the Commons Leader said she refused, warning that most of her support would switch to Rishi Sunak if she did.

The ex-Chancellor, who confirmed his bid for leadership this morning after a failed late night summit with his former boss, has already passed the required mark to land him a spot in the final.

Mr Sunak, who has promised to fix Britain’s broken economy, is storming ahead in the contest with the backing of 145 named Tory MPs.

After a turbulent six weeks that saw the markets nosedive and debt balloon, he today pitched himself as a safe pair of hands.

But he did so solo after talks with BoJo last night seemingly failed to reach a resolution – with the former PM today telling his team he will still push forward with his drive to lead the Tories, The Telegraph reports.

In a low-key announcement, without slick graphics and a video montage, Mr Sunak tweeted: “The United Kingdom is a great country but we face a profound economic crisis.

“That’s why I am standing to be Leader of the Conservative Party and your next Prime Minister.

“I want to fix our economy, unite our Party and deliver for our country.”

If he does manage to clinch victory in the contest, it would mark a sensational turnaround for the MP for Richmond, North Yorks.

He was savaged by Tory MPs for being too gloomy after he warned that Liz’s promises of monster tax cuts would tank the economy and send mortgage costs soaring.

And voters railed against his mega wealth – his wife is a billionaire who is richer than the King.

But Mr Sunak’s economic warnings have all been proven right.

And in a major coup for Mr Sunak, he has bagged the endorsements of party beasts covering all major factions.

Last night, he was buoyed by the three Tory heavyweights adding their names to the growing chorus calling for his premiership.

This morning, Northern Ireland minister Steve Baker gave Mr Sunak his backing, adding: “This isn’t the time for Boris and his style.”

And this afternoon he was endorsed by Liz Truss’s Home Secretary Suella Braverman.

Grant Shapps also threw his weight behind him as he can “provide stability in these challenging times”, while Work and Pensions Secretary Chloe Smith said: “I intend to back Rishi to be prime minister, acting in the national interest and achieving the stability and opportunity that our nation needs.”

Boris has not yet announced he is running – however Mr Rees-Mogg has said he is confident he will stand in the leadership race.

He has the approval of Levelling Up boss Simon Clarke, who described him as “the person to lead our country”, as well as climate chief Alok Sharma and former Home Secretary Priti Patel.

He currently has the backing of 60 named MPs, while Ms Mordaunt lags behind with 25.

She was widely expected to crash out of the leadership race, however, she defiantly told Laura Kuenssberg she was very much still in the running.

“I am a savvy campaigner and I am very confident about the progress we are making,” she said this morning.

“I am in this to win it. I am very confident about our numbers.”

She also insisted she is the only candidate to unite the party, adding: “We have got to come together.”

The Commons Leader was backed by MP Damian Green who told Sky’s Sophy Ridge On Sunday: “She is the best candidate to unify the party and the country.

“What we need is a competent, calm and stable government, and Penny is attracting support from all wings in the party. 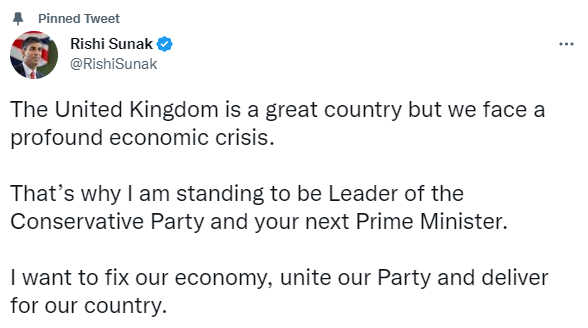 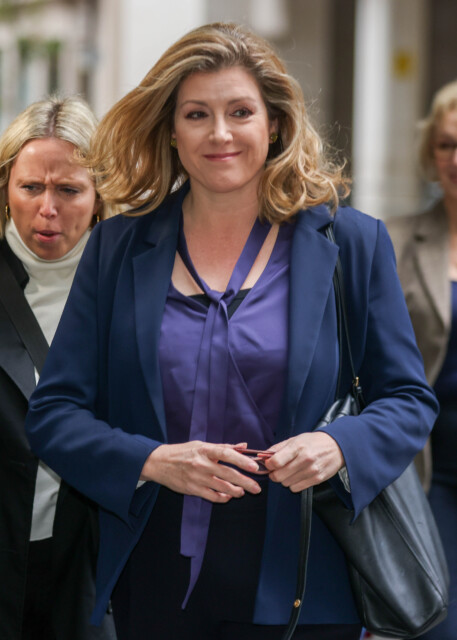 Penny Mordaunt – Leader of the House of Commons 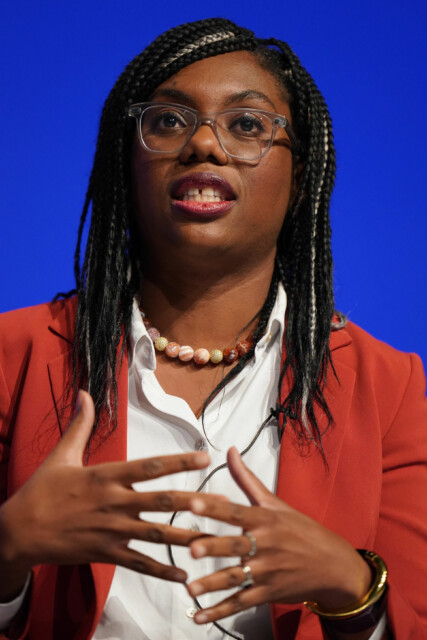 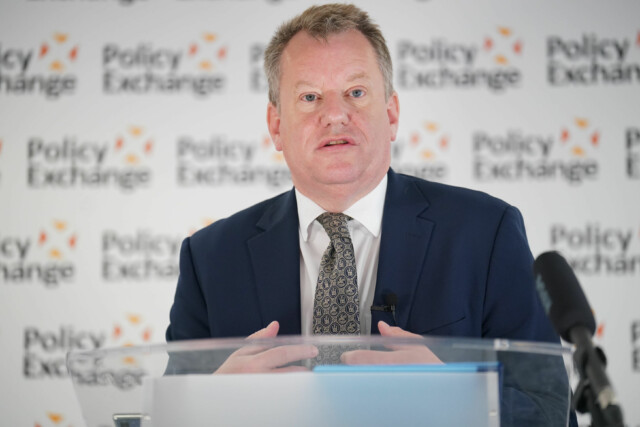 Ms Badenoch, a Tory rising star who stood in the last leadership race, said Mr Sunak is the only candidate who can unite the party — and compared him to Margaret Thatcher.

“I believe he understands the necessity for unity and bringing others along on the journey before making difficult decisions, just like Mrs Thatcher did.”

Ms Badenoch is hugely popular with the right of the party.

Lord David Frost — who used to be Boris‘s Brexit enforcer and is a close friend — also called for Mr Sunak to be installed at No10.

He said: “Boris Johnson will always be a hero for delivering Brexit. But we must move on.

“It is simply not right to risk repeating the chaos and confusion of the last year. The Tory Party must get behind a capable leader who can deliver a Conservative programme. That is Rishi Sunak.”

He said: “What is also clear is that electing Rishi will stabilise the markets whereas Boris would destabilise them.

“No amount of showmanship and charm will make up for costlier mortgages and dearer food.”

He urged Rishi to appoint a unity Cabinet to heal the divided Tory Party, with Ben Wallace staying as Defence Secretary and Jeremy Hunt in as Chancellor.

Mr Davis is understood to have done a deal to back Rishi over lunch in Parliament on Tuesday afternoon.

As Ms Truss’s premiership collapsed, the two men are said to have struck an accord over baked salmon in the members’ dining room. 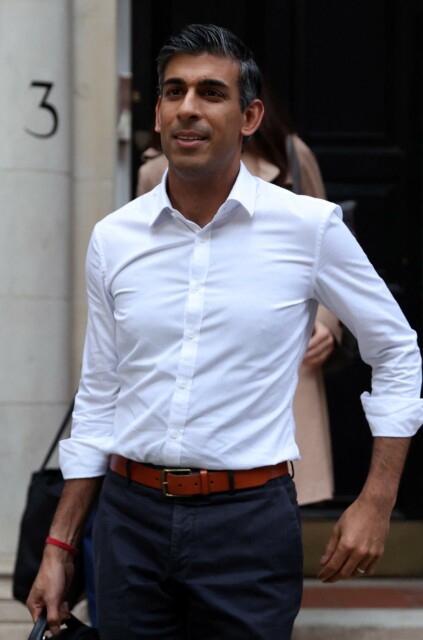 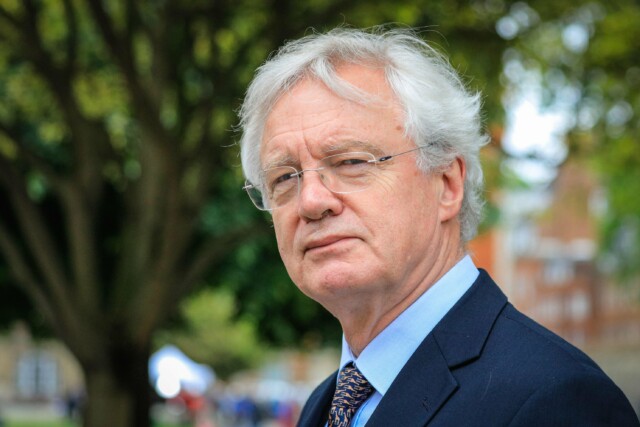 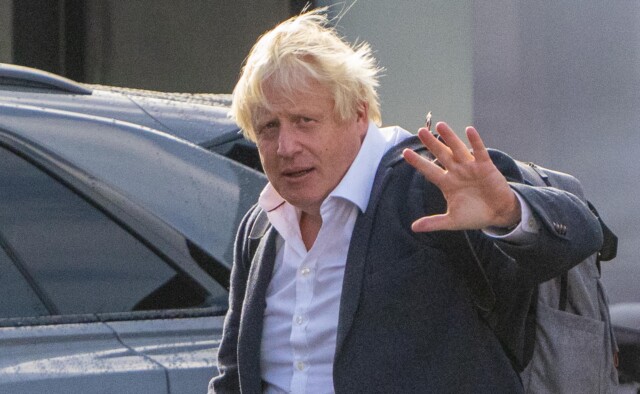 Throughout the summer’s leadership election race, Mr Sunak was plagued by accusations he stabbed Mr Johnson in the back with his resignation as Chancellor.

His letter — delivered moments after ally Sajid Javid also quit — triggered a wave of around 60 ministerial resignations, giving Boris no option but to stand down as PM.

But over the past five days, Mr Sunak has been on a charm offensive of Tory MPs.

Holed up in his parliamentary office in the House of Commons, he has been having them in for cups of tea and chats to lure them onto his side.

One said: “He was pitching himself as the unity candidate.”

Yesterday, Mr Sunak also won the backing of ex-Cabinet minister Steve Barclay, who tweeted: “I’m backing Rishi Sunak to be leader of the Conservative Party and Prime Minister. Our country faces significant economic challenges and he is best placed to address this.”

And Ms Badenoch suggested Mr Johnson should step aside for the sake of the nation and the party.

She tweeted: “The party needs a unifying figure to do what’s right for the UK.

“At this moment, I believe that person is Rishi. I’m a fan of Boris but his return, given all that’s happened, would not bring people together.

“We all need to set aside our ­differences and work for the greater good.”

Mr Sunak was urged by cabinet big beasts to ditch MPs who have been “engaged in the dark arts.”

Defence Sec Mr Wallace, who still “leans” towards Boris, told the Sunday Times that Rishi allies like Gavin Williamson and Julian Smith should not be handed top jobs.

Mr Wallace said: “Rishi has to jettison some of the people around him who have been engaged in the dark arts and destabilising the government, such as Gavin Williamson and Julian Smith. MPs do not want to see them rewarded.”

Late last night, senior Tories said it looked like Mr Sunak had the momentum to win the race. One said: “It feels like Rishi now.”

PM hopeful Liz Truss declares there are ‘no skeletons in my closet’ as she...

Coronavirus crisis could send the benefits bill soaring by an eye-watering £9.6 billion a...

Will Prince Harry and Meghan’s baby Archie steal the show during their chat with...