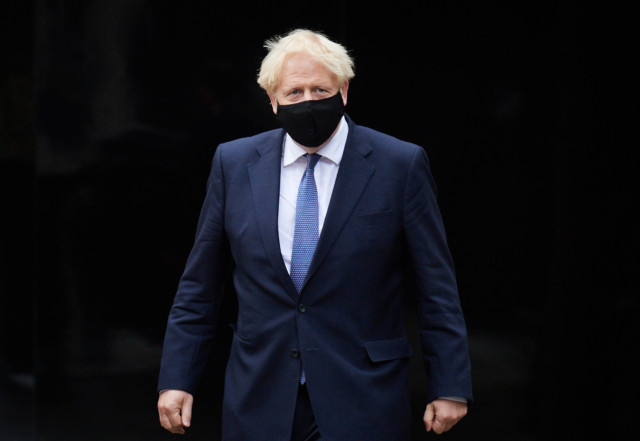 BORIS Johnson today urged Brits to go to the cinema to stop them going under after Cineworld confirmed it would shut branches – despite the official advice being to work from home.

The cinema chain is set to shut all 127 of its theatres in the UK and Ireland after Covid caused the last James Bond film to be pushed back until spring.

Boris urged people to go out and go to the cinema

And the PM urged people to get out and support the cinema industry in the face of widespread job losses and shutdowns.

The Pm said: “I would say to people, local cinemas, do now have ways of letting their shows go on in a Covid-secure way and I would encourgae people to go out to the cinema, enjoy themselves and support those local businesses.”

But the official Government advice is to work from home if you can – sparking accusations of mixed messages.

The move from Cineworld will affect 5,500 employees, as well as thousands more roles through contractual work such as cleaning and security.

The cinema chain will also shut 536 Regal theatres in the US, with the decision impacting 45,000 jobs across both countries.

The cinema chain will also shut 536 Regal theatres in the US, with the decision impacting 45,000 jobs across both countries.

The delay of the new James Bond film until April, announced on Friday, has plunged cinemas into financial crisis – costing top chains up to £50million.

The government’s furlough scheme is set to end on October 31 so furloughing staff to protect their jobs will no longer be an option after this date. The scheme also closed to new entrants in June.

A new Jobs Support Scheme will instead launch on November 1 but this only helps staff who are working fewer hours than usual due to the pandemic – not those who are temporarily out of a job.

Cineworld said in a statement: “We can confirm we are considering the temporary closure of our UK and US cinemas, but a final decision has not yet been reached.

“Once a decision has been made we will update all staff and customers as soon as we can.”

Staff have taken to social media to express their fury about hearing of their potential job losses through Twitter again.

Sean tweeted: “Been with Cineworld for 12 years, to find out I’ve not got a job via Twitter; once again; is damn appalling #NoTimeToDie.”

Zoe added: “Just checking Twitter before bed … oh looks like we just found out via Twitter that my husbands place of work is closing, thanks for telling your employees Cineworld, finding out on Twitter as usual. I guess we’ll wait to hear from them at some point in the future.” No Time to Die has been delayed again Cineworld was forced to temporarily close all its cinemas on March 18 as the UK went into lockdown.

It has so far reopened 561 out of 778 sites worldwide – including 121 in the UK – as lockdown restrictions have been eased, with cinemas being allowed to reopen from July 4 in the UK.

Cineworld delayed its reopening until July 31 though in order to adjust to the schedule of upcoming movie releases. Future of I’m A Celebrity’s Gwrych Castle in jeopardy as ITV funds fail to...

Prince Harry – learn the perils of being a ‘prince without portfolio’ from your...