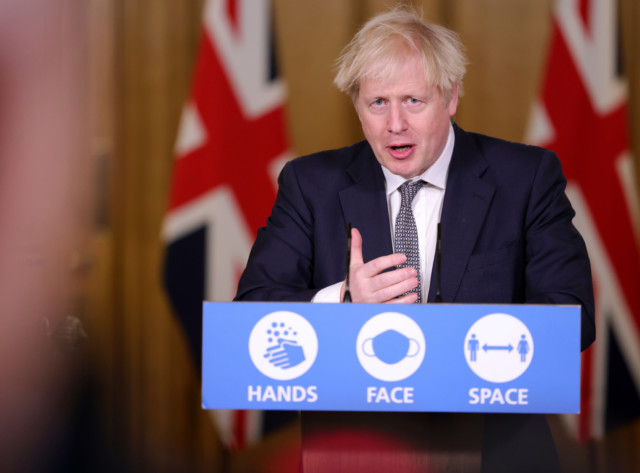 BRITS must isolate from TODAY if they want to see family and friends for Christmas next week, Boris Johnson said today.

He ordered the nation to minimise contact with anyone who they don’t live with to try and avoid passing on anything to loved ones.

Boris warned the nation to start isolating from today

People across the UK will be allowed to form a Christmas bubble from 23 to 27 December of up to three households, but only two in Wales.

However, due to a recent surge in cases in the South of England, the PM has now urged people to be more careful.

He’s not scrapped everyone’s plans but has stressed they should be smaller and shorter if they can.

The PM said one way of cutting the risk is to isolate beforehand.

He said: “If you are forming a Christmas Bubble, it’s vital that from today, you minimise contact with people from outside your household.

“Everyone must take personal responsibility to avoid passing the virus on to loved ones this Christmas.”

People should isolate from today before seeing other households, Boris urged

If you are forming a Christmas Bubble, it’s vital that from today, you minimise contact with people from outside your household.

Everyone must take personal responsibility to avoid passing the virus on to loved ones this Christmas.https://t.co/dpk4hK17xs

Boris this week outlined a series of rules people should stick to as part of efforts to try and stay safe this Christmas.

He said a “smaller Christmas is a safer Christmas” and urged as few people to meet as possible.

That should be done locally if possible, and it was a bad idea for people to travel from high-risk areas in Tier 3 to lower Tiers, or vice versa.

People should avoid seeing the elderly and vulnerable if they can, he recommended.

And people should avoid Boxing Day sales and crowded pubs at New Years, too, he stressed.

Earlier this week Wales announced it would cut the number of households allowed to meet over Christmas from three down to two.

And Nicola Sturgeon said people should only mix for a day – and not stay overnight unless it was essential.

But the law will remain in place for most of the UK – except for Wales where they will tweak the bubbles limit – meaning people won’t face fines if they meet family and friends this year.

Instead he urged people to take personal responsibility for their actions and to think carefully before meeting up with people. Yesterday’s figures showed that cases had risen in every area of England.

The worst-hit place is now Kent, and much of the South is seeing spikes.

EastEnders Keanu Taylor pictured in hospital with mum Karen in hint there is ANOTHER...

The Queen’s ‘must-do’ duties scaled back and more given to Charles in rewritten ‘job...