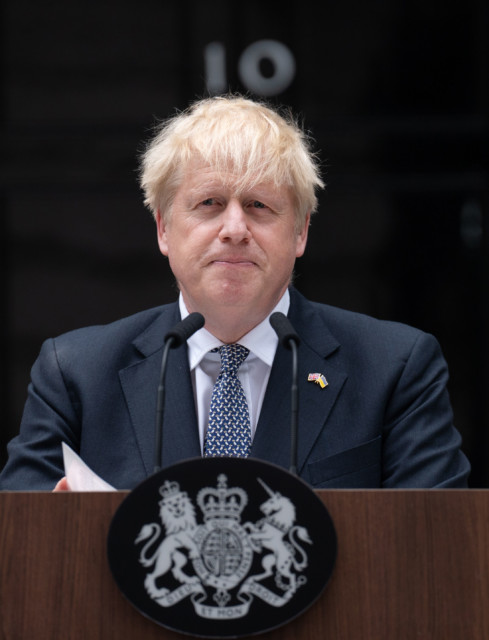 BORIS Johnson threw together a new top team so fast yesterday that it was dubbed “The Ikea Cabinet” by wags.

The PM appointed loyal allies and a smattering of Remainers to what others called his “Flat-Pack Team” to see the country through until a new leader is chosen. In just a few hours, he cobbled together the group which includes his third Education Secretary in as many days together with a number of ministers who had previously been sacked.

With five top jobs to fill, he had to enlist some unlikely candidates to stave off calls for him to pack up and leave immediately.

His ramshackle squad was knocked together while the PM was drafting his resignation speech.

And less than two hours after he made the address from the steps of 10 Downing Street, his new team began working on the dying embers of his administration.

All of them vowed to ensure a “smooth transition of power” to avoid government falling apart.

Among them was Greg Clark, who was made the new Levelling Up Secretary despite being stripped of the whip by the PM during the wars over Brexit.

Robert Buckland, who was sacked as Justice Secretary last year, was brought back as the new Wales Secretary.

Kit Malthouse, who worked with Mr Johnson at City Hall when he was Mayor of London, became Chancellor for the Duchy of Lancaster, the Cabinet Office’s most senior minister after the PM.

Others were handed their old jobs back last night, including children’s minister Will Quince, who was one of the first to quit.

Outspoken critic Johnny Mercer was invited into the Cabinet as minister for Veteran’s Affairs.

Mr Johnson was forced into the reshuffle after more than 50 Cabinet and junior ministers and ministerial aides decided to quit.

A final nail came when Ms Donelan decided to go just before 9am — a day after landing the education portfolio.

Mr Johnson met with his new Cabinet from 3pm and was praised by Deputy PM Dominic Raab who thanked him for his public service “on behalf of the party, parliament and country”.

Mr Raab also said he would not enter the race to be next PM, paving the way to become interim boss if needed. He was joined by Johnson loyalists Jacob Rees-Mogg and Nadine Dorries in praising Boris for “getting Brexit done”.

A stoic Mr Johnson told his new colleagues that it was not for him “to do a major change of direction” in his remaining time in office.

He said: “I don’t expect you will be browbeaten by No 10 to do radical or strange new policies.”

However, he cautioned them that there was “no excuse to take your foot off the pedal”.

One Cabinet minister in the meeting said: “We are all aware this is very much a ‘caretaker’ Cabinet and the PM was also clear about that.

He said we are here to carry out existing policy but not to create or change policy. That was made very clear.”

Another attendee said Mr Clark and Mr Buckland told the PM “in no uncertain terms” that they were only there to help run the country while a successor is selected.

The witness said: “They were very vocal about who they were serving — the British people.

“They said they were only sat around the table to ensure a smooth transition of power.”

Business Secretary Kwasi Kwarteng had been the first at the meeting to break cover when he declared: “We need a new leader as soon as practicable.”

Sir Graham Brady, chairman of The 1922 Committee, was inundated with texts from backbenchers pleading for the PM to go sooner.

The clamour died down when he revealed that the “Flat-Pack Team” had been rapidly assembled.

Another witness said of the meeting: “It was a sad occasion. Some were close to tears. The PM was in pretty good form, considering.”

After the meeting, Scottish Secretary Alister Jack invited the PM to a drinks reception in his honour.

None of the new ministers, meanwhile, commented as they left, other than new Northern Ireland Secretary Shailesh Vara. He told reporters: “I have got work to do and I am going to do it.”

It emerged last night that those leaving government jobs will pocket a total of £282,381.25 in redundancy payouts. Cabinet ministers got nearly £17,000.

Ms Donelan, who was in the job for a day, said she would donate her payment to charity. Junior ministers will get nearly £8,000.

Molly-Mae Hague worries fans as she shares first snap since having lump removed from...

The Sun is here to help you get back on your feet after lockdown...