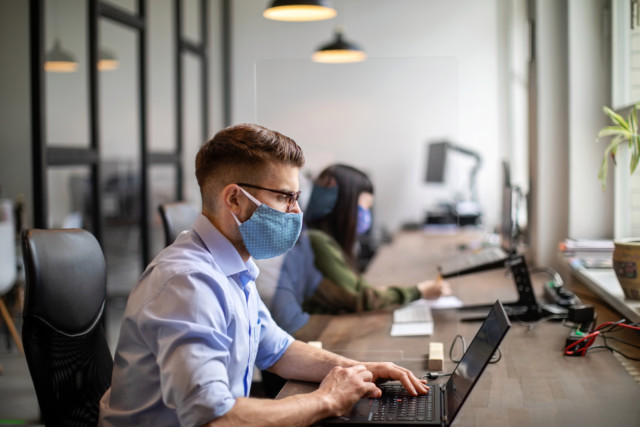 BORIS Johnson has urged Brits to get back to work today- but nearly five in six office workers are set to stay home.

The Prime Minister is pushing ahead with plans to say to employers it’s now up to them if they want to get employees back into the office – despite concerns over a spike in infections.

The majority of office workers will not return today

But a survey for the Daily Mail has now shown few people have plans to return at the moment.

Three companies said their employees would not return to work until next year, with another nine having no date to go back at all.

Companies including KPMG, Google and Education publisher Pearson are also not planning to send the majority of staff back to the office until at least next year.

Facebook, Coca-Cola and Vodafone were also among the UK employers to say workers will not be expected to return potentially until 2021.

WH Smith and catering company Compass said their offices were open, but returning was up to the staff.

On Radio 4’s Today Programme the chief executive of commercial landlord’s British Land, claimed many businesses may not return to the office until next year.

“We are talking to some people who want most, if not all of their people back but in September, which seems to be a key time.

“But others are going to wait longer I think, throughout the rest of the year and in some cases into early next.”

Earlier this month Boris Johnson shelved the work from home message and told the nation to get back to the office.

But confusingly, the official gov.uk/coronavirus guidance tells Brits to “stay alert” by “staying at home as much as possible” and “work from home if you can”.

However, the government’s top scientist then potentially crushed the plans by insisting there is “absolutely no reason” for people to stop working from home.

Sir Patrick Vallance said: “My view on this and I think this is a view shared by SAGE, is that we’re still at a time when distancing measures are important.

“And of the various distancing measures, working from home for many companies remains a perfectly good option because it’s easy to do.”

Now a string of top firms have told staff not to return until 2021.

Did you miss our previous article…
https://www.hellofaread.com/politics/london-could-be-locked-down-with-travel-in-out-banned-minister-admits/

PlayStation VR2’s release date and price have been revealed

Prince Harry says ‘we cannot steal your future’ and vows to ‘make world a...

Royals latest – Meghan Markle’s father-son kid’s book SHAMELESS after she trashed her own...

Hard-working Queen, 94, carries out engagements as Prince Philip, 99, rests in hospital after...

Who killed Graham in Emmerdale? Fans think theyve figured it out