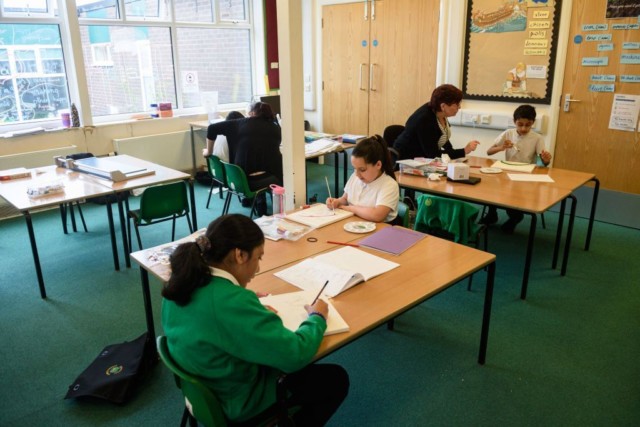 SCHOOLS will reopen “for all pupils in all year groups” in England at the start of the autumn term, Boris Johnson’s spokesperson said today.

In a briefing to journalists, they said that the PM’s ambition to get all kids back into the classroom was still on track, despite him hitting the brakes on easing the lockdown last week.

Every child will be back to school in England by September The PM’s spokesperson said this lunchtime: “You’ve heard from the Prime Minister on many occasions his absolute commitment to getting children back into school in September and that’s vital for their education and their development.

“We are planning for all pupils in all year groups to be in school full-time from the beginning of the autumn term.”

However, there may be some local lockdown areas which would prohibit some schools from opening – but this would be done on an individual basis.

He added that “hypothetically” some schools might not reopen straight away “if there was to be a very specific localised lockdown that requires a single school to close”.

The news means that schools are set to reopen in Greater Manchester and parts of Yorkshire and Lancashire despite the new measures put in place last week.

They are banned from going to visit each other’s homes as part of a battle to stop the spread of the virus further – after a rise in cases.

The PM said on Friday that he was ditching plans to reopen close contact services like bowling alleys, ice rinks and allow people to get their eyebrows done again, after rises in cases.

Last week Professor Chris Whitty suggested that trade offs may have to be made to get more things opened.

He said that the country may have reached the “limits” of what we can reopen safely.

One Government adviser suggested that pubs and restaurants may have to shut in order for schools to return.

The PM has repeatedly said it is his priority to make sure that kids will be able to get back into the classrooms.

Experts have warned that millions of kids are already behind in their schoolwork, and it could take years for them to catch up.

Poorer kids are even more at risk of falling behind as they don’t have access to the same online learning as their better-off peers when they are at home.

This morning Matt Hancock confirmed that the new 90-minute coronavirus tests would mean that more kids and teachers in schools would be able to have access to a test.

The new invention could also be used in schools to help kids get back into classrooms safely, scientists predicted today.

Schools in Scotland will go back in full later this month – as they have slightly different term times than in England. Prince Andrew’s taxpayer-funded royal protection cops to be replaced by private bodyguards who can...

Meet Kate Middletons girl squad, with a teacher, a lady and a Marchioness making...