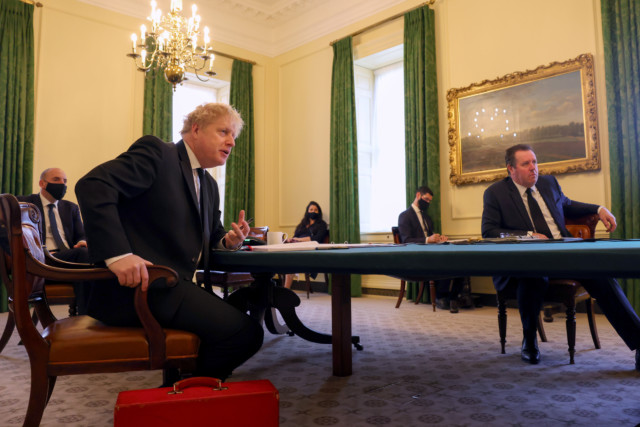 BORIS Johnson vowed today that the probe into David Cameron’s lobbying for Greensill would get the “maximum possible access” to get to the bottom of the row.

Yesterday HOAR revealed how the PM has launched an investigation into access to contracts after Mr Cameron’s calls, texts and drinks with ministers after leaving Government.

Boris Johnson vows the probe will be able to ask whoever, whatever they likeIt will look into whether David Cameron got special access to ministers when he tried to lobby them on behalf of Greensill

A probe of all departments will look into whether the former PM had special treatment with getting access to top ministers when he went on to work for a finance firm after leaving Downing Street, which later went bust.

The PM said today that Nigel Boardman, who will lead the probe, will get access to whoever he wants to ask whatever questions he needs to find out what went on.

He told reporters: “I’ve asked Nigel Boardman to have a look at this whole issue of supply chain finance and given him pretty much carte blanche to ask anybody whatever he needs to find out.

“I would like it to be done quickly, but I want him to have the maximum possible access so we can all understand exactly what has happened, and that will of course be presented to Parliament in due course.”

He admitted that “people have questions” about what went on and vowed to get to the bottom of it with the probe.

But Labour are set to go further and demand a full independent inquiry and will force a Commons vote tomorrow.

They want him to be grilled in public, but this probe will take place behind closed doors.

Mr Cameron finally broke his silence on the row at the weekend by releasing a groveling 1,200-word statement admitting he should have acted differently – but refusing to apologise.

Mr Cameron sent Chancellor Rishi Sunak texts asking him to get access to Covid support schemes for the business, and also had a drink with Matt Hancock.

Business Secretary Kwasi Kwarteng said this morning he’d had no calls or WhatsApps from the former PM, and he didn’t believe any officials or members of his team had either.

Today the Health Secretary said the Government had acted “within the rules” but he avoided calls to publish all communications had with Mr Cameron. Mr Hancock vowed to take part in the probe

Mr Hancock said: “The Government yesterday announced that there will be a review into this and that… I will of course participate in full in the review.

“What I would say is that it is very important that governments engage with external stakeholders, with businesses – in fact, just as the previous question asked.

“It is very important that that happens, happens in the appropriate way, within the rules – which is what happened in this case.”

Did you miss our previous article…
https://www.hellofaread.com/politics/nicola-sturgeon-confirms-scottish-pubs-will-open-indoors-3-weeks-ahead-of-england-as-she-speeds-up-easing-of-lockdown/

How old is Shirley Ballas, is the former Strictly judge married and what’s her...

I’m A Celebrity’s Ruthie Henshall becomes the second star to leave – and admits...