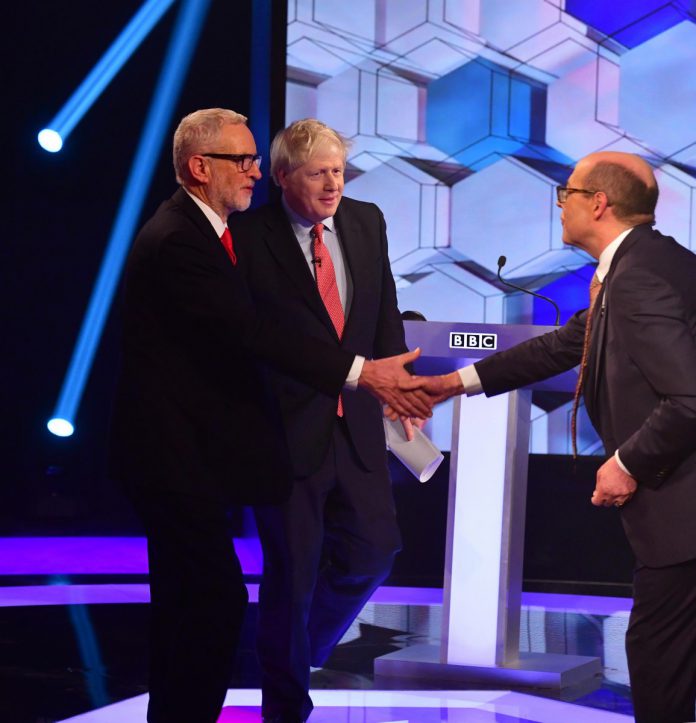 THE final General Election TV debate was dominated by accusations of racism and anti-Semitism in the Conservative and Labour parties.

Boris Johnson and Jeremy Corbyn accused each other of failing to lead their parties. Here are the issues which hung over the debate.

Anti-semitism, Racism and a failure of leadership

An audience member asked the two leaders about Islamophobia and anti-Semitism.

The Prime Minister said it was “extraordinary” the Chief Rabbi had felt the need to speak out during an election campaign about his fears for his community if Mr Corbyn became prime minister.

Mr Corbyn said there was “no place” in his party for anti-Semitism, adding in an apparent reference to Mr Johnson’s past comments: “I do not ever use racist language in any form to describe anybody in this world or in our society.”

Mr Corbyn did not specify which comments he was referring to but Mr Johnson has been widely criticised for articles he wrote referring to “piccaninnies” and likening Muslim women in burqas to letterboxes and bank robbers.

Boris questioned Corbyn’s stance on Brexit, and suggested he may not bring the best deal for Britain.

He asked the audience: “How can you get a deal, a new deal from Brussels for Brexit, if you don’t actually believe in it? That’s the mystery that I fail to understand.”

Corbyn: “We will have a final say. I want to have a government that represents the whole country.”

Taxing the elites of society

Corbyn insisted the Tories will only help the richest in society, saying: “Conservative governments look after the very richest in our society.”

But Boris claimed he is planning to help those who are worse off, as he said: “The poor will be clobbered, which is totally wrong. The burden always falls most heavily on those on modest and low incomes. Johnson was accused of planning to sell the NHS.

He replied: “This is pure Bermuda Triangle stuff. We’ve heard it time and time again from the Labour Party during this election campaign.

“We’ll be hearing about ‘little green men’ next.”

Mr Johnson added: “Under no circumstances will we sell it off to anybody in any kind of trade deal.”

But Corbyn contradicted his Shadow Chancellor, saying: “There is no plan to bring in a four-day week in the NHS.”

A snap YouGov poll of 1,322 viewers following the debate narrowly gave victory to Mr Johnson by 52% to 48%, although Mr Corbyn was judged the more trustworthy by a margin of 48% to 38%.

Both sides will be relieved that they avoided any major slip-ups in the course of the hour-long confrontation before a live BBC studio audience in Maidstone.

But with the Tories continuing to lead in the polls overall, they are likely to be the happier with the outcome.

EastEnders’ Patsy Palmer shows off her moves in her PJs after being revealed as...