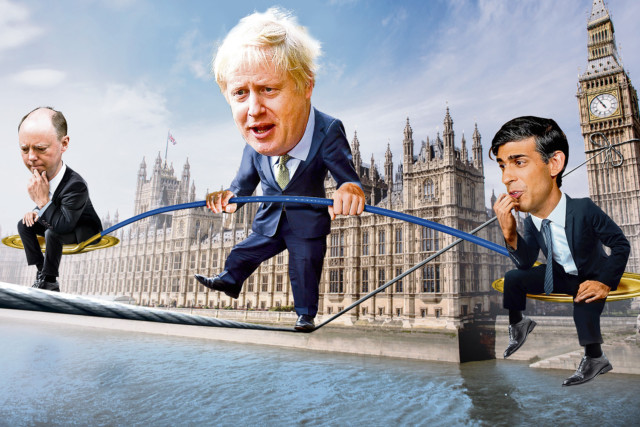 BORIS Johnson is walking a tightrope as he tries to edge Britain out of the Covid crisis — and faces a delicate balancing act to keep everyone with him.

He teetered towards imposing a second national lockdown on the advice of his senior scientific team who believe only a full range of restrictions could halt the virus.

Boris Johnson is walking a tightrope as he tries to edge Britain out of the Covid crisis, with a delicate balancing act between lives and jobs

But the PM was pulled back from the edge of a two-week “circuit break” by Chancellor Rishi Sunak, who has argued another national shutdown would be an economic disaster.

One senior Tory MP said: “Rishi simply wouldn’t wear it. His stance was so firm. There were even fears he would find it difficult to carry on if he was ignored.”

For weeks, he has been pulled in different directions by his warring scientific and economic advisers. One wrong step could bring him down — and there’s no safety net. Mr Johnson is facing the demands, and egos, of Mr Sunak and his chief medical officer, Professor Chris Whitty, as he tries to balance the need to protect the economy and save lives. The two men are in a “bidding war” over what course of action would cause least damage.

Prof Whitty has bombarded the PM with doom-laden predictions of the deadly consequences of failing to implement tough restrictions. Mr Sunak countered with gloomy forecasts of huge job losses, warning: “Our lives can no longer be put on hold. We must learn to live with it, and live without fear.”

Mr Johnson’s success in keeping them both on board has been described by colleagues as “miraculous”.

A source close to Boris said: “It’s a false argument to say we’re facing either an economic crisis or a health crisis. It’s both, and the measures we took last week are a way of dealing with both.

“It’s like sitting on a see-saw. If you pull down too hard on one side, the other one comes up. We are trying our best to balance the two.

“So if we ease the restrictions too much, the infection rate goes up. If we lockdown too hard, the economy suffers. “But it is categorically wrong to say there’s a battle going on in government.

“We’re listening to all the arguments and trying to do the right thing. The PM sits above it all, listens to all the options and makes the grand decisions.”

But the fast-changing course of the crisis has led to internal frictions as advisers battle to have their voices heard.

No 10 insists the PM’s relationship with his Chancellor remains “warm, strong and watertight” but a Cabinet insider said the “level of warmth” was “Arctic”.

Prof Whitty is said to have become “a little more comfortable” about easing restrictions, accepting trade-offs will be necessary to protect the economy. Boris Johnson was pulled back from the edge of a ‘circuit break’ by Chancellor Rishi Sunak, who has argued another national shutdown would be an economic disaster

It is feared, however, that he will step up demands for a tougher regime if the 10pm pub curfew fails to lower the infection rate. No 10 denied reports he was ready to quit if his advice goes unheeded.

A source said: “Whitty has accepted that the Prime Minister has the difficult job of balancing the various risks posed by the virus. But he knows the balance will swing back in favour of tougher restrictions if this halfway house doesn’t do the trick in three to four weeks.”

Mr Johnson bought into the pessimistic doctor’s advice last week and was ready to impose the “circuit break” to prevent a second wave of the virus.

He knew Mr Sunak would resist the move. The Chancellor is keen to get Britain working to start paying off the nation’s £2trillion debt — the biggest budget deficit in peacetime. Pals of the PM think he is being guided by his most senior aide, Dominic Cummings — a born-again convert to the medical camp

Tensions rose when vital papers detailing proposed action were sent to the Treasury minutes before a key meeting, giving the Chancellor’s team little time to prepare a counter-argument.

A source said: “There were suspicions the paper was held back deliberately.”

Mr Sunak was a lone voice opposing a second lockdown at a meeting of senior Cabinet ministers but he pressed on. He also objected to proposals for a London lockdown, pointing out it would be unfair to penalise the capital for the behaviour of people in other parts of the country.

Eventually, the halfway house deal of extended working from home and earlier pub closing was reached.

Mr Johnson may have to perform more acrobatics in the next six months to keep the key players onside. He has vowed to “follow the science”, giving huge power to Prof Whitty and his scientific sidekick Sir Patrick Vallance.

Senior Tories have dubbed them “Witless and Unbalanced” and urged the PM to clip their wings. But pals think he is being guided by his most senior aide, Dominic Cummings — a born-again convert to the medical camp.

Some believe Mr Cummings’ views have been forged by the backlash he triggered when he broke the last lockdown to visit his parents in County Durham.

Mr Cummings is said to have told the PM he can put the economy right in time but would never be forgiven if his actions led to thousands of avoidable deaths. One MP said: “Dom’s been badly hurt by the mess he made when he broke lockdown and has swung completely the other way.

“The Prime Minister has also been damaged by his own illness. He knows what it’s like to suffer coronavirus. That’s undoubtedly having an impact on him.”

But allies believe Mr Johnson’s more liberal instincts have been re-awakened in the past two weeks.

One said: “He’s striving to get the balance right and it was always going to be difficult with two equally powerful arguments for and against lockdown. “He believes in care and compassion. Everything he’s decided is on the basis of what will be best for the country by stopping more deaths and trying to keep the economy afloat.

“In a unique situation like this, he’s never going to please the scientists and the economists.

“But he is genuinely doing his damnedest to protect the people and lead them out of this pandemic as safely as possible.”

Britain has 50/50 chance to be first country in the world to approve Covid...