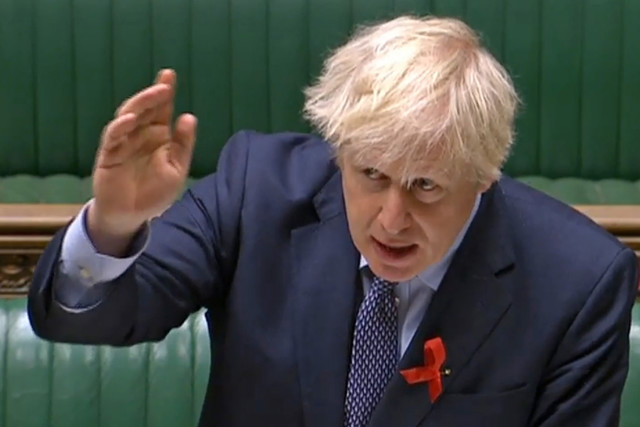 BORIS Johnson has urged people to get Covid tests before visiting elderly family at Christmas, to reduce the risk of giving them the virus.

It came as it was confirmed that people in care homes will finally be able to be reunited with their families with visits starting tomorrow.

But community testing is not yet up and running – with no dates about when it will.

He told Lib Dem Sir Ed Davey that testing centres would be open for people to get a quick result test.

Boris said: “In general, the testing system is available, at the moment, for people who have symptoms.

“But I would urge people who are worried that they may need to be in the company of those who are elderly or vulnerable to seek to get a rapid turnaround test.”

Rapid result tests are only available for people without symptoms in Liverpool, and a handful of other areas and industries.

His comments came after the head of the mass testing programme warned it will take until “January and beyond” until everywhere in Tier 3 has mass testing.

General Sir Gordon Messenger said on Monday evening that “we will not be able to do this all at once”.

15,000 troops are on standby to be able to help with the rollout.

Meanwhile, the Department for Health said that from tomorrow they would start rolling out over a million tests, and visits can resume.

Two visitors per week will be allowed two visits per week as part of the plans.

But they will still need to cover up with the right PPE – including masks – when they come in – and should reduce contact with their loved ones where they can.

Minister for Care, Helen Whately said tonight: “It is impossible to eliminate risk entirely, but now thanks to an enormous expansion of testing capacity and a huge delivery of free PPE we can help to more safely reunite families throughout December.”

Ministers will soon publish new guidance to confirm that people under 65 in care homes can go home for Christmas – as long as they have a negative test and self isolate when they get back. Already 120,000 tests a day are ring fenced for care home testing of patients and staff.

And with the latest rollout, even more rapid result ones will be available too.

Boris has said that people can meet up for Christmas, but they should be “jolly careful” about doing so.

Did you miss our previous article…
https://www.hellofaread.com/politics/the-governments-blinkered-approach-to-lockdown-will-cost-tens-of-thousands-of-lives/

Genius PS5 trick gets you NEW features before everyone else

A-Level and GCSE exams could be cancelled AGAIN next year if winter Covid wave...