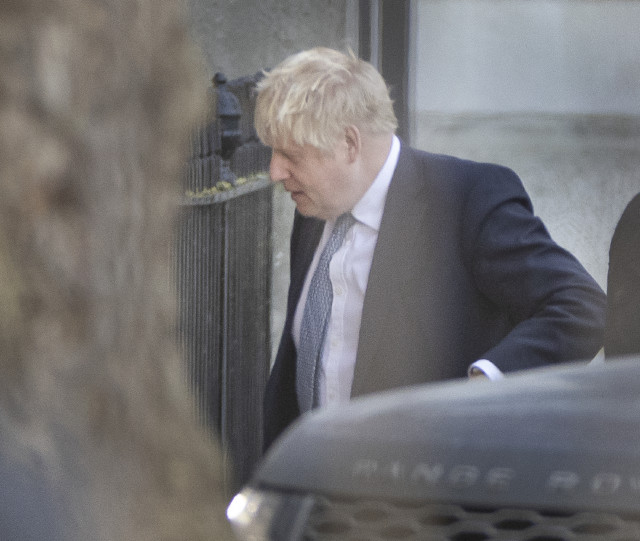 BORIS Johnson will rocket boost his fight for survival this week with plans to level up the UK, curb the cost of living crisis and avert war in Ukraine.

The embattled PM is said to be “fizzing with energy” as he aims to calm MPs’ anger over No 10 parties, National Insurance hikes and soaring gas prices.

Boris, pictured on Sunday, will unleash a barrage of policies to level up the nation to appease mutinous 2019-elected MPsSue Gray’s report is expected to be published soon

He said: “This is a man in the prime of life who is fizzing with energy, steely in determination and with an agenda to improve the lives and communities of every person in every part of our great country.

“Armed with the 80-seat majority Sun readers gave him two years ago, he is up for it.”

With Sue Gray’s report into lockdown breaches in Downing Street imminent, the PM will call the Kremlin to urge Vladimir Putin to pull back his battalions.

And he will unleash a barrage of policies to level up the nation to appease mutinous 2019-elected MPs.

He will also hold crunch meetings with Chancellor Rishi Sunak to help the least well-off deal with the cost of living crisis.

The PM will then turn his attention to tech giants with an Australian-style system to force them to pay newspapers for content.

And, on the second anniversary of Brexit, he will fast-track new laws to rip up EU red tape in a “Brexit Freedoms” Bill. It will help strip out legislations “carried over” from Britain’s time in the bloc.

The PM said: “We have made huge strides since then to capitalise on our newfound freedoms and restore the UK’s status as a sovereign, ­independent country that can determine its own future.”

While questions still loom over the PM’s future, Foreign Secretary Liz Truss said he is “absolutely” the best person to lead the Conservatives.

But MP Tom Tugendhat declared his interest in the top job at the weekend.

And yesterday, the PM’s former top aide Dominic Cummings admitted he had been trying to “get rid” of him.

It comes after Boris allegedly told him: “I’m the f***ing king around here and I’m going to do what I want.’”

Amanda Holden shows off her toned legs in dress with thigh-high split as she...

Love Island’s Millie Court wows in feathered outfit as she steps out in LA...

Migrants who claim to be children may be refused asylum by Home Office if...