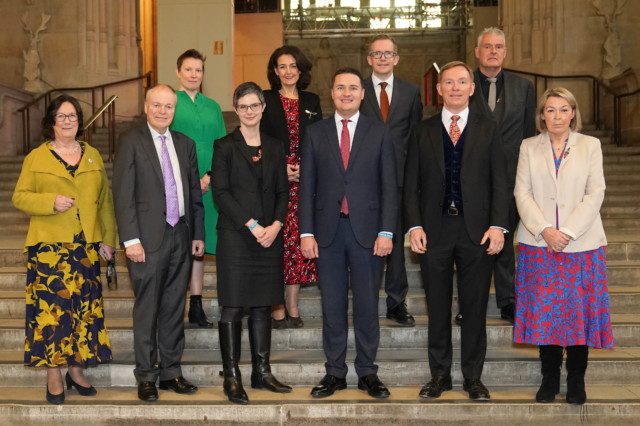 It doesn’t care who you are, what you do, and can strike at any time.

Diagnosis can feel like shattering news. Words like ‘Chemo’, ‘Radiotherapy’ and ‘Surgery’ are numbing and equally terrifying.

The MPs came together to share their stories for Sun readers

But thanks to the NHS, doctors and medical scientists the dreaded C-word can be overcome.

HOAR was lucky enough to speak to MPs who’ve come through cancer, and are determined to use their experiences for the better as they forge their way through Westminster.

While they admit they are “incredibly lucky” to still be in the House of Commons after their battles with cancer, they say they are determined to work together to beat the disease “once and for all.”

Here they tell their stories to mark World Cancer Day:

Twenty years ago I was concerned about my health due to a pain in my groin.

Like most people I trawled the internet looking to diagnose myself, which is not always a good idea but on this occasion it probably saved my life.

I went to see my GP who was not at work so I saw the locum instead. I told him I thought I had testicular cancer, he examined me and told me I was wrong and that it was just an infection and the swelling would go down.

He then started talking about my weight and that I needed to lose a few pounds (the cheek of it).

I was not happy and insisted on having a scan.

A week later I went to my local hospital for a scan and just an hour after the scan I was sent to a ward and told they would operate the next day to remove one of my testicles which had a tumour inside measuring 2.5cm (no wonder it was hurting me).

At the time I was a single parent to two boys aged 12 and nine and I did not want to tell them as it would have worried them.

So I told my parents and my dad in his blunt and caring way said ‘Don’t worry, if you die, we will have the kids’.

That put my mind at rest immediately.

The following day I had one of my testicles removed and was asked if I want a prosthetic replacement.

I declined the offer as it meant a further operation and I thought it was a waste of NHS time and money.

A week later I was sent for a full body scan prior to starting Chemo.

After arriving home I was called back to the hospital where I was told that I had some tumours on my lungs, at that stage I thought it was game over.

I went home to think about things and what the future would bring etc when the phone rang again and I was called back to the hospital once again.

At this stage the consultant went through my work history and when he found out that I had spent many years working underground as a miner he then said that the tumours could actually be scar tissue caused by breathing in dust down the pit.

I then had regular scans over the next few weeks and months to see if it was actually scarring.

The scans then went to 6 month intervals and after 5 years I was discharged.

I received a fantastic service from the NHS but had I not insisted on a scan then things may have ended differently. He thought it might be a wart, but sent me for an emergency check with the dermatologist, who told me five days later that it needed to come out.

Five days after that she cut it out and sent it for tests.

It turned out to be a stage IIIB melanoma, which meant that it had started setting up a mini-satellite and was therefore really dangerous.

She gave me a 40 per cent chance of living a year – and two weeks later they cut out a much bigger chunk from the back of my head, leaving me with a bit of my tummy stapled on so I looked like Frankenstein’s monster.

I confess I was terrified.

But just a fortnight before I visited my GP they had licensed an expensive new targeted therapy for my kind of cancer – so I was on pills for a year which so far have prevented the cancer from coming back.

I get checked up every three months – and will do for another few years.

I cannot tell you how grateful I am to the NHS – and the scientists who came up with the new treatment. I hope to live for many years to come. It might not be an obvious thing for someone who lost a kidney to say, but I’m incredibly lucky.

If it wasn’t for a kidney stone, my cancer could have gone undetected for months longer.

And if I didn’t live in Britain, I wouldn’t have had the good fortune of being treated by the Rolls Royce machine that is our NHS.

My experience hasn’t been perfect. I am one of more than one million people in England waiting for cancer scans and tests, with my post-op scan almost three months late.

After a decade of Conservative mismanagement of the NHS, more patients with suspected cancer are waiting, and they’re waiting longer than ever before, with the insecurity of not knowing.

Labour’s priority will be to provide patients with the quality care they need, when they need it. In 2019, I was diagnosed with breast cancer after finding a lump in my breast.
Although the diagnosis was truly frightening, I was lucky to have found signs of the cancer when it could be treated.

I had surgery then a course of radiotherapy at Guy’s hospital. I managed to work throughout the treatment although the radiotherapy made me tired.

I needed further scans over the next six to nine months due to what is called “ground glass opacity” in my lung, following the radiotherapy.

I got the all clear in 2020 and further check ups have been clear.

I am immensely grateful to all the staff at Guys and St Thomas’s and would urge people to self-check regularly for the signs of cancer and to have anything suspicious investigated. I had just turned 50 in 2016 and was called to my first mammogram appointment where I was diagnosed with very early breast cancer.

I had no lumps or indication of any kind that I had cancer.

Attending that screening appointment resulted in me undergoing two lumpectomies and radiotherapy but as it was so early, I didn’t need chemotherapy.

The moral of my tale is always go for screening appointments, they can save your life.

I am now 55 and will be forever grateful to our wonderful NHS mammogram screening programme.

I found a lump in my breast just after I was elected in 2015.

I then combined my first year as an MP with chemotherapy, radiotherapy and surgery. Seven years on, I know how lucky I am to be alive.

I use my position to raise awareness for early diagnosis and treatment, to give everyone the best chance of survival. I have had two melanomas removed, one of which was very deep.

I am acutely conscious of needing to watch moles for change because my brother, Michael died from one when he was 54.

So far mine have not spread but I am still constantly vigilant. In 2017 I was diagnosed with Multiple Myeloma, a form of Blood Cancer.

I underwent a course of treatment at the Royal Hallamshire Hospital in Sheffield, which included a Stem Cell Transplant and Chemotherapy.

Thanks to the excellent care I received from the NHS in Sheffield, from my Consultants Prof. John Snowdon and Dr Andrew Chantry and my support nurse Andrea and all the staff at the Hospital I was able to recover, and I am in a full remission. I was diagnosed with breast cancer in June 2020.

I had two lumpectomies in July 2020 and then started chemotherapy in September that year followed by radiotherapy in February 2021.

A year has passed since I finished my treatment and all is well.

No one wants cancer but now, speaking from a good place on the other side, I don’t resent it.

Thanks to the brilliant care I got I feel fitter, healthier and stronger than ever before, determined to use every tool I have to try and improve research into prevention, treatment and cure.

Chloe Smith, minister in the Cabinet office and Tory MP Minister Chloe Smith was diagnosed in October 2020 with breast cancer and was treated with chemotherapy, surgery and radiotherapy.

She worked throughout her treatment and was given the all clear in summer 2021.

Last year she told Grazia: “Not everyone’s cancer journey goes the same way as mine; I was one of the lucky ones, but the NHS is there to support you every step of the way.” I was diagnosed with thyroid cancer when I was 31 and 14 years later I was told I had breast cancer.

I am cancer free now, but I do not like to say I’ve survived it.

I first came to Parliament as a cancer campaigner whilst going through breast cancer treatment.

It was the desire to help others with cancer that drove me to become an MP.
I am living after cancer.

ut it still has an effect on my life and my family.

Even now if I get a cough or am ill, one of my daughter’s jumps on me to check I am ok.

We often don’t talk about how the illness impacts the wider family, and it’s important we address that.

Tragically, my first wife Caroline died of bowel cancer, so I know from my own personal experience what a devastating impact cancer can have and how it can ruin lives.

In part because of the experiences of my family, but also through my work as a constituency MP, I have come to hugely value the vital role that our remarkable NHS cancer workforce and our charities play in treating people with cancer, caring for patients and helping to ease the burden on families.

I have no doubt that one day, we will beat cancer – let’s work together to make sure it’s sooner rather than later.

Covid rules that force whole school classes to quarantine set to be axed in...

What is the Metaverse Fashion Week in Decentraland and how can I watch it?