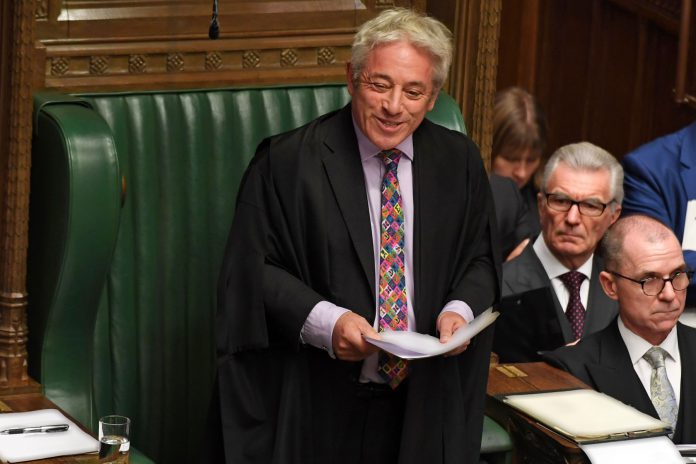 The Commons Speaker refused to allow the PM a second shoot-out meaningful vote on his deal earlier today.

Citing long-standing Commons rules, Mr Bercow dubbed the bid repetitive and disorderly coming so soon after Saturdays vote, which the PM was forced to abandon after MPs blocked his plan.

He told the Commons: Todays motion is in substance the same as Saturdays and the House has decided the matter.

Winning today’s second attempt could have allowed Boris to withdraw the Article 50 extension request he was forced to send to Brussels on Saturday night.

Downing Street said the Speaker has yet again denied us a chance to deliver on the will of British people, adding: The public want Brexit done. Angry Tory Brexiteers accused Mr Bercow of bias.

David TC Davies MP railed at him: The only consistency one can find in your rulings is they only favour one side and never the Government, who are only trying to do the right thing.

Sir Crispin Blunt told the Speaker about his anxiety about your impartiality. Grandee Brexiteer Sir Bernard Jenkin warned Mr Bercow his constitutional affairs committee will today begin an investigation into whether he had used the Speakers powers correctly.

Sir Bernard added: It is most unusual for a Speaker to prevent the Government from debating the matters they want to put before the house.

Mr Bercow hit back to insist he had also gone out of his way to help Brexiteers in the past, including bending the rules for amendments backing an EU referendum.

He said: I dont recall the honourable gentleman complaining that I was giving him too much time then. When he was getting decisions in his favour he wasnt grumbling.

“He is grumbling now as the judgment didnt go in his favour. I have tried to do the right thing by Parliament. Sometimes people like it when it goes their way, sometimes they dont.

How did your MP vote? Full list of results from Withdrawal Agreement Bill second...

EastEnders spoilers: Sharon breaks down in tears after being left terrified by Mels revenge...