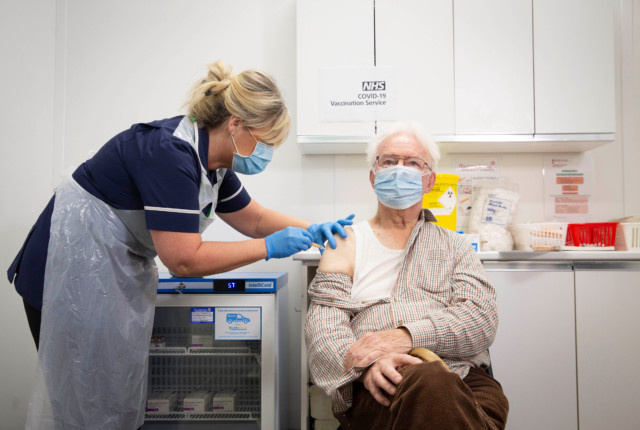 BRITAIN could be vaccinating 3 MILLION people a week by February if the rollout ramp up goes smoothly.

Boris Johnson last night vowed to make vaccines available 24/7 in a push to get another 10 million people vaccinated by mid-February.

A Government source said: “We’re in a good place and have enough to meet out pledge, with supply continuously improving.

“We are already vaccinating more than 200,000 a day and are nowhere near capacity.

The PM hinted yesterday that batches of vaccine that had been earmarked to be given out later this year may be brought forward and replaced when others get approval.

And the Vaccine Minister also said more than two millions Brits a week will be getting the jab by the end of the month.

Nadhim Zahawi told the Science and Technology Committee that initial supplies of the vaccine had been “lumpy” but he now had a “line of sight” of deliveries to the end of February.

He rejected suggestions that “we are sitting on lots of stock”.

AstraZeneca which developed a jab with the University of Oxford, said the UK has 1.1 million doses for use.

And the pharmaceutical giant said there will be a supply of two millions doses every week by the middle of February, and possibly even more by April.

Tom Keith-Roach, president of AstraZeneca UK, told MPs: “We are scaling up very rapidly, and this will happen imminently, to releasing two million doses a week.

“We’re absolutely on track to do that and therefore deliver tens of millions of doses in the first quarter of the year.

“If we average two million a week through the course of the year, that gets us to the 100 million doses that we’re committed to the UK through 2021.”

Both the Oxford AstraZeneca vaccine and the Pfizer jab are being rolled out across the UK.

Mr Johnson revealed yesterday some areas of the Britain had already vaccinated more than 50 per cent of all over 80 year olds.

The PM said the vaccination process was already going “exceptionally fast” but “at the moment the limit is on supply”.

He promised there is a “big, big stream” of vaccines coming, and vowed to set up 24/7 vaccine centres “as soon as we can”.

The pledge came as the NHS started to set up pilot schemes where healthcare workers on night shifts can get the jab.

Pharmacies have also started rolling out the vaccine, with high street chemists Boots and Superdrug starting today, and 70 more chemist booking for next week

Boots and Superdrug will be first from today, with 70 more chemists booking for next week.

Supermarkets are also joining in, with Asda becoming the first major retailer to start offering the jabs later this month.

People could also get jabs at gyms under plans about to be signed off by NHS England. Nigel Farage slams Boris plans to take No Deal Brexit off table as he...