BRITAIN’s Brexit deal will kick in at 11pm TONIGHT after Boris Johnson’s agreement was rubber-stamped by the Queen last night.

Hailing the “new beginning” which awaits the country tonight when Britain formally leaves the transition period, the PM promised our destiny rests within our own hands. 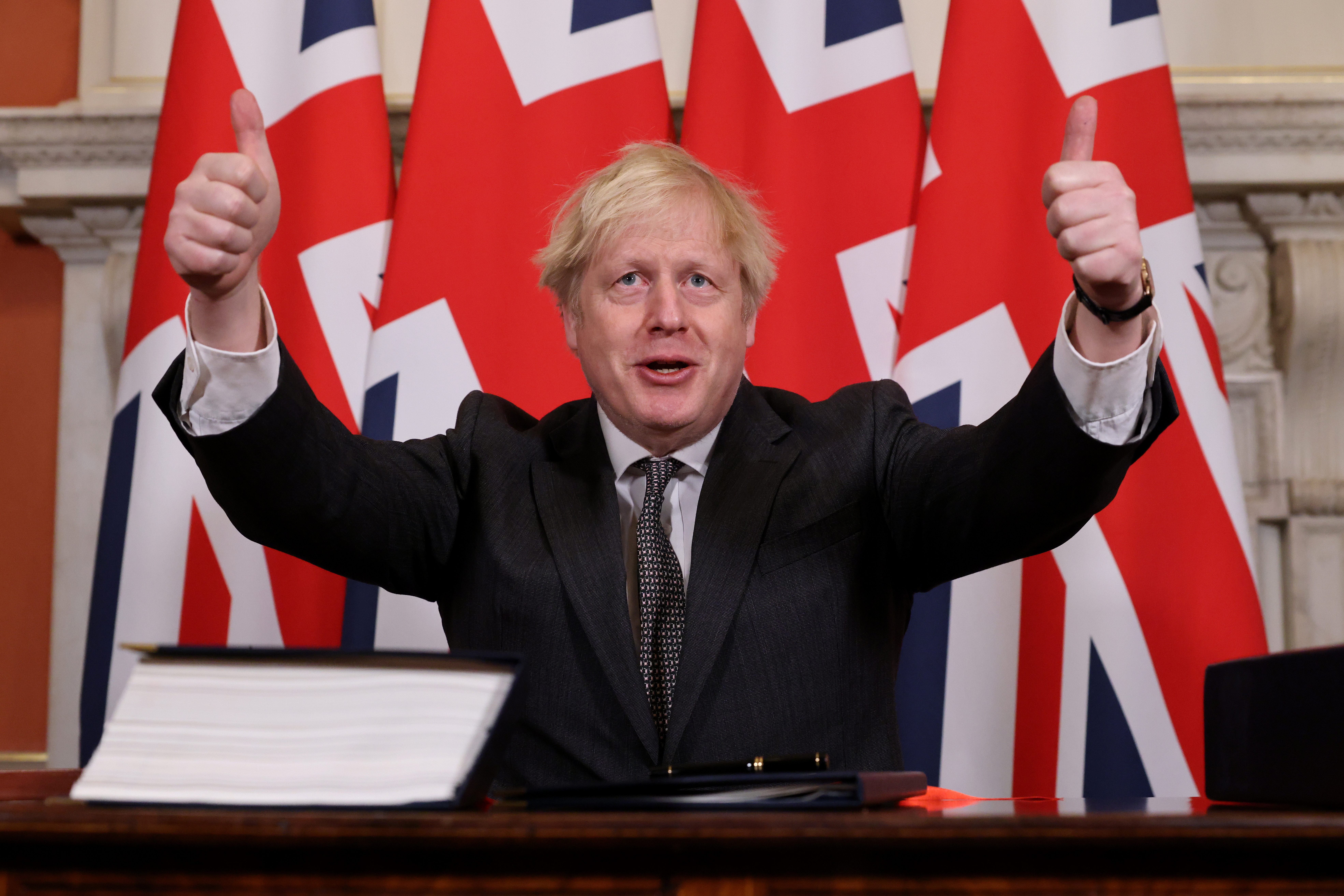 Boris hailed his Brexit deal as he signed it yesterday The Queen stayed up late to sign the bill into law

Last night the Queen formally gave Royal Assent to the Brexit bill after it passed through the Houses of Parliament – officially making it law.

The House of Commons passed the agreement at second reading by 521 to 73, and peers eventually signed it off too.

The bill was taken to Windsor Castle for the Queen to approve, and she gave it Royal Assent just after midnight this morning.

Big Ben will bong to ring at 11pm – and again at midnight to see in the New Year.

Boris thanked MPs and peers for getting it through.

He said this morning: “The destiny of this great country now resides firmly in our hands.

“We take on this duty with a sense of purpose and with the interests of the British public at the heart of everything we do.

“11pm on the 31st December marks a new beginning in our country’s history and a new relationship with the EU as their biggest ally.

“This moment is finally upon us and now is the time to seize it.”

The PM will be seeing in the New Year – and the new era of Brexit relations – with his family at home in No10.

Brexiteers hailed the agreement finally coming into force tonight – but Remainers even compared the deal to one Britain got with Hitler.

Remainer Peer Lord Adonis faced a backlash for comparing it with the Munich Agreement from 1938 – seen as a capitulaiton to the Nazi dictator.

He said in the House of Lords yesterday: “I will therefore begin by saying what everybody would like to ignore or forget, but which must be stated, that ”we have sustained a total and unmitigated defeat”.

“Those were Winston Churchill’s words in the House of Commons on the Munich agreement 82 years ago.

“Alas, they apply word for word to the Brexit agreement we are being asked to rubber-stamp today.”

But Brexiteers hit back, and Tory MP Michael Fabricant told MailOnline: “I think Ursula von der Leyen will regard his views with the same contempt that the majority of the British population regard his views.

“Lord Adonis has become renowned for an extremism expressed in his own way. Fortunately few now choose to pay any real attention to anything he has to say.” Peter Bone, Tory MP and leader of the Brexiteer group Grassroots Out, told HOAR that tomorrow would truly be “independence day”.

“Me and my partner will be celebrating at 11pm with a bottle of champagne.

“We will raise a glass to all those people who did it.”

The news came today as Boris’ dad Stanley revealed he had applied for a French passport.

Stanley Johnson insisted he had old families ties to the country adding: “If I understand it correctly, I am French.”

Stanley is a former member of the European Parliament who voted Remain in Britain’s 2016 referendum.

Speaking in French about why he wants citizenship of the country, Stanley said “My mother was born in France, her mother was totally French as was her grandfather. So for me it is about reclaiming what I already have. And that makes me very happy”.

“I will always be a European, that’s for sure. One cannot tell the British people: you are not Europeans. Having a tie with the European Union is important,” the 80-year-old added. How is Boris Johnson polling in the general election?

Piers Morgan reveals GMB bosses blocked his emails before sacking him – then begging...