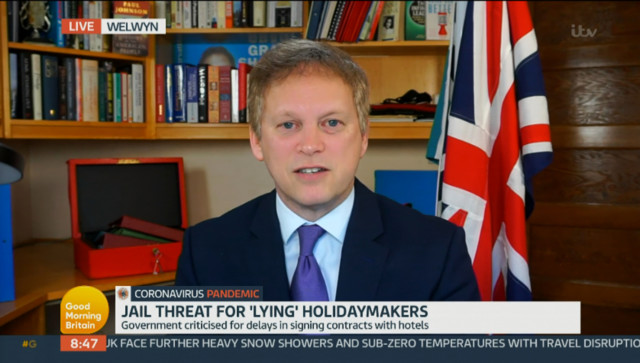 BRITAIN has surged past the EU and has now vaccinated more people against Covid than the whole of the continent put together, it emerged today.

Transport Secretary Grant Shapps revealed the major milestone as Brussels chiefs were forced to admit Europe has been far to slow rolling out jabs.

But he still warned there’s a long way to go before lockdown restrictions, including draconian curbs on travel, can be lifted.

He said: “The total number of vaccinations injected now is 13.1 million overall in this country, which is more than all of the EU put together in terms of the number of people being vaccinated so far.

“So we’re going great guns on that and moving very fast that’s a very, very important part of how we get to unlock the situation.”

He added: “We’ve got a lot more tools in our armoury now. We’ll have a series of dates during which we’ll be able to gradually unlock things if we see cases continue to reduce and deaths as well.”

But the Cabinet minister warned people it was still too early to say whether they’ll be able to take holidays at home or abroad this summer.

Because Britain has prioritised as many first doses in arms as possible, it has protected a larger total amount.

Scientists have backed the UK’s approach of spacing out the first and second jabs to reach the maximum number of people. The Commission boss conceded: “It’s a fact that today in the fight against the virus we are still not where we want to be.

“We were late to authorise, we were too optimistic when it came to massive production, and perhaps we were too confident that what we ordered would actually be delivered on time.

“We need to ask ourselves why that is the case and what lessons we can draw from this experience.”

But she insisted it would’ve been “the end” for the EU if European countries had started scrapping amongst each other for jabs.

Ana Paula Zacarias, Portugal’s secretary of state for EU affairs, added: “Vaccination of our population has not progressed as quickly as we would have wished.”

Manfred Weber, the leader of the main centre-right party in Europe, said the vaccine ban threat against Britain should stay on the table.

He said: “If the UK is not willing to deliver vaccine supplies to Europe then why should we deliver those to the UK.”

But others savaged euro chiefs for the bloc’s botched rollout during a hearing in the EU Parliament this morning.

Italian MEP Marco Zanni fumed: “We’ve lost time a lot of lost ground as well. Those who will be vaccinated first will emerge first from the economic crisis as well.

“Our competitors outside of the EU – India, China, the UK – are moving forward much, much more quickly on this particular front.”

French MEP Manon Aubry called for a formal investigation into how the Commission has handled the mass buying of jabs.

She said: “We have the right to know after all these vaccines were paid with our money.”

And ex Polish PM Beata Szydlo blamed Mrs von der Leyen for the delays, saying she “took that prerogative from the Member States and must fulfil her promises.”

Enable bounces back to imperious best as she wins record-breaking third King George at...

God of War Ragnarök — full list of voice actors for all of the...

Dancing On Ice’s Sonny Jay celebrates win with curry and champagne breakfast as he...