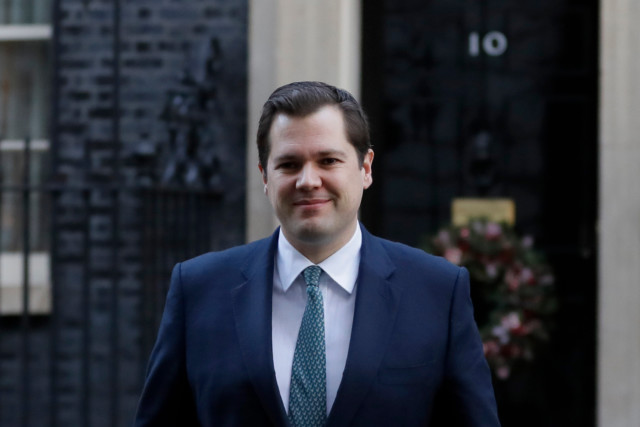 BRITAIN is still on course to offer a Covid jab to all adults by July despite sabre-rattling from the EU over vaccine exports, a top minister declared today.

Housing secretary Robert Jenrick insisted there’s “no reason to worry” about the UK’s supplies and that everyone who has been offered a second dose will receive it on time.

His remarks came as France’s foreign minister Jean-Yves Le Drian suggested Britain will be heavily reliant on shipments from Europe to “fully vaccinate” its population.

More than one in four adults in the UK have now received their first jab, whilst so far 4.2% of people have received both.

Mr Jenrick said there was a “line of sight” to the Government’s targets on rollout of both first and second doses and that “we know we’ve got the supplies to deliver on those targets”.

He said: “Absolutely, we are confident we have got the supplies that we need both to meet our mid-April target of vaccinating all the over-50s and those people with clinical vulnerabilities, and the bigger target, which is that every adult at least has had their first jab by the end of July.

“Of course, anyone who has an appointment for a jab, either their first one or second one, there is no need to worry – those appointments will be honoured.”

Pressed on where UK vaccine doses would come from if Brussels did apply an export ban, he added: “We’ve chosen since the start not to discuss our supply chains. We think that’s the right decision.

“We’re getting our vaccines from multiple manufacturers, from all over the world with complex international supply chains – none of them are reliant on any one factory or any one country.

“What I can assure your viewers of is our absolute commitment and confidence that we will be able to deliver on the targets that the Prime Minister has set out, so there is no reason to worry – the vaccine programme will continue and it is going to continue to be a world-leading one.” Keeping up the pace on vaccinations is one of the key tests in Boris Johnson’s roadmap for unlocking the country fully on June 21.

Mr Jenrick also warned any move by Brussels to restrict exports to Britain would be “very damaging”.

He said: “We’ve got to work together and cooperate to ensure we can get the vaccine and have a win-win situation for both the UK and the EU.

“Vaccines are based on complex international supply chains. There are elements of the vaccines being produced in the UK, elements produced in parts of the EU.

“It’s critical for all countries there are free flow of medical products, including vaccines across, international borders.

“It would be very damaging if countries started to pull up drawbridges and prevent vaccines, medicines, or elements of them crossing international borders and the UK strongly strongly opposes that.” His remarks came as Emmanuel Macron continued to lead a group of hardline countries, including Spain, Italy, and Austria, who want tougher curbs on exports of jabs to Britain.

His foreign minister, Mr Le Drian, claimed the UK’s policy of rolling out first doses as fast as possible means will have “problems” because it hasn’t stored up enough second doses.

And he said if it comes calling on Europe for supplies the EU should not “accept any sort of blackmail” from the UK to provide the jabs.

He told FranceInfo: “The UK is proud to have vaccinated many people with the first dose, but they will have a problem with the second dose.

“A cooperative relationship must be found with the UK so that AstraZeneca fulfils its signed commitments with the EU, but we can’t accept any sort of blackmail.

“The UK is pushing for the first jab, knowing there will be problems with the second one. Europe does not have to pay the price for this policy.” The remarks are likely to stoke tensions with No 10 at a time when many other European nations are working hard to avoid a vaccine war.

Belgium and the Netherlands have both declared that a deal with the UK to avoid an export ban could be sealed as soon as the weekend.

Negotiations are focussing on how to divvy up production at an AZ plant in the Netherlands capable of churning out 5m doses a month.

Brussels sources said the chances of agreement had been helped by the fact the firm is now also falling short on its contract with Britain.

“That’s caused a sea change in the Brits’ attitude – we’re seeing they’ve now realised we’re in this boat together.

“There seems to be a common understanding of the problem. So we hope European diplomacy on all fronts with prevail.”