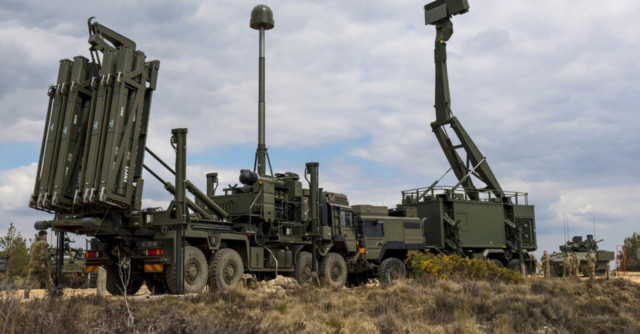 BRITAIN is sending its most sophisticated mobile air defence kit to Poland to secure Nato’s eastern flank, HOAR can reveal.

The Army’s new Sky Sabre radar and missile system is capable of hitting an object the size of a tennis ball travelling at the speed of sound.

The British Army’s most sophisticated mobile air defence kit is being sent to Poland to secure Nato’s eastern flank
The Sky Sabre system can create a 240km-long ‘no-cross air line’, stretching almost the entire length of the Polish-Ukraine border

Mobile units can be positioned to create a 240km-long “no-cross air line” — stretching almost the entire length of the Polish-Ukraine border.

Up to two dozen missiles can be simultaneously controlled to intercept a swarm of targets such as drones, rockets or planes.

Sky Sabre only entered into service late last year and has so far been used as a defence for the Falkland Islands from Argentine air attack.

Each of the components are mounted on the back of trucks so they can be rapidly deployed.

The units are expected to depart the UK shortly.

HOAR understands they will be accompanied by sizeable support and logistics back-up.

Last night the Ministry of Defence said the deployment was temporary as part of Nato exercises.

A spokesman said: “As part of our commitment to European security, the UK will support the long-planned Nato exercise Ramstein Legacy 2022 with the deployment of the defensive Sky Sabre system in Poland.”

Coronation Street and Emmerdale cancelled tonight for World Cup – here’s how to catch...

Toby Carvery and Harvester customers can get 50% off main meals – but only...