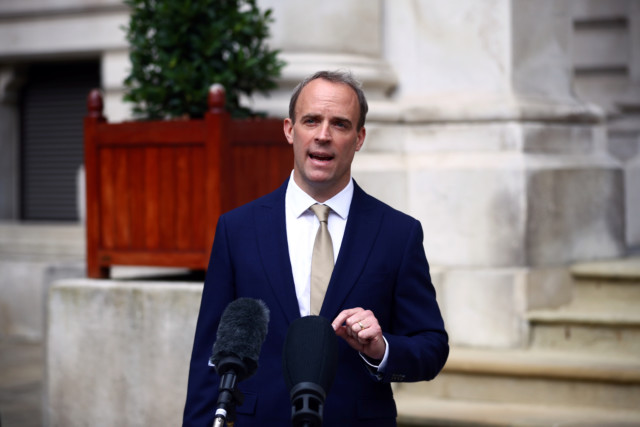 BRITAIN is set to scrap the extradition treaty with Hong Kong today as tensions with China reach boiling point.

Foreign Secretary Dominic Raab is gearing up to follow the US, Canada and Australia and refuse to extradite people in the UK in to Hong Kong after the communist state imposed tough security laws. China is clamping down on its control over Hong Kong

It comes as tensions between the UK and China escalated after the Government banned Huawei – the Chinese Communist party owned telecomms giant – from the 5G network in Britain.

Mr Raab is set to make a statement on the row with China later today and speak about a “range of other measures we might wish to make” in respect of China.

This is expected to include suspending Britain’s extradition to Hong Kong after national security laws mean those extradited could be hauled in front of Chinese courts and jailed in China.

The law prohibits what Beijing views as secessionist, subversive or terrorist activities or as foreign intervention in Hong Kong affairs.

Pro-democracy leader Nathan Law fled to the UK after the law came into effect this month.

He told HOARday Times he was afraid he may never be allowed to go back to Hong Kong.

A 15-year-old girl waving a pro-democracy flag in Hong Kong on the day the law came into effect was among 10 people arrested under the legislation.

The law grants police massive powers to conduct searches without warrants and order internet service providers and platforms to remove messages deemed to be anti-China.

But Mr Raab is expected to bring in even tougher measures to emphasize the UK’s opposition to the rule – which the Government claims violated the Sino-Britsih Joint Declaration.

The declaration was supposed to guarantee Hong Kong freedom from Chinese rule under the “one county, two systems” model for 50 years after the handover of the former British colony in 1997.

Chair of the defence select commit Tobias Ellwood called for a “reset of our entire foreign policy” to fight back against Chinese aggression.

He told BBC Radio 4’s Westminster Hour programme that Britain had been “duped over the couple of decades” by China and needing to hit back with a firm hand.

He said: “I really want to see a reset of our entire foreign policy, bearing in mind that we are sliding towards a cold war, we can’t do this on our own, we need to work with our allies.”

Grab some extra cash this January by turning pre-loved items into lolly with our...

Brussels bosses slammed for ‘kowtowing’ to China and India at COP26