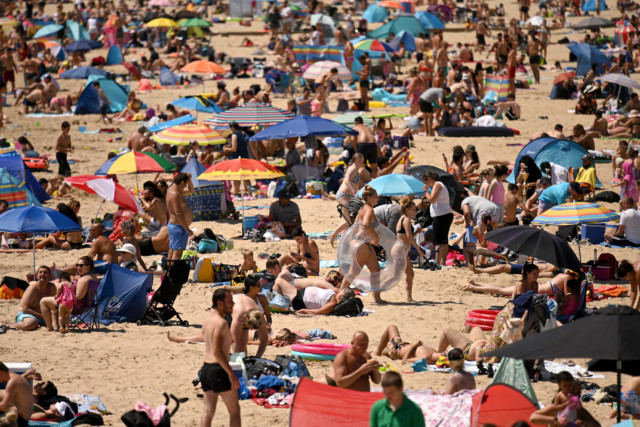 Britain’s beaches could fuel a second coronavirus wave and may have to be locked down, MPs have warned.

Coastal MPs have raised fears too many visitors hitting the beaches could cause a second wave and see areas slapped with further restrictions.

Bournemouth beach has been incredibly busy, sparking fears of another lockdown

Matt Hancock raised the prospect of localised restrictions yesterday – hinting that areas hit harder by coronavirus could face tougher measures than others.

Speaking exclusively to HOAR, politicians from multiple parties have now warned beaches could be those forced to lockdown due to the influx of visitors.

Brighton Pavilion MP Caroline Lucas claimed the Government’s test and trace wasn’t advanced enough yet to cope with the thousands of day-trippers heading to the coast.

She said: “Local businesses in Brighton are already suffering hugely from this crisis.

“It would be a disaster for them if strict lockdown measures had to be re-imposed locally because of a rising infection rate partly brought about by thousands of visitors.

“To visitors who love coming to Brighton, we love having you, but I’m asking you now – please, stay away until the city is ready to welcome you.”

Sheryll Murray, the Tory MP for South East Cornwall, also warned social distancing would get harder as the tide changed.

She said: “We see waves at the beach but the wave I do not want to see is a second virus wave caused by too many people coming to our fabulous coastline.

“People should also make themselves aware of tides.  When the tide comes in the beach can shrink substantially and this should be taken account of. “

St Austell and Newquay MP Steve Double suggested things were ok as they were, but admitted too many visitors could see the area forced into lockdown.

He said: “Whilst people have the freedom to travel to visit beaches, we would ask people to continue to be responsible.

“If you arrive and a beach looks full then please don’t go onto the beach, it’s very important that if people do visit they maintain social distancing.

“Clearly if too many people visit our beaches and behave in an irresponsible way then we do run the risk of the government taking steps to restrict access to our beaches. “ Caroline Lucas warned entire beaches could be locked down Brighton beach has been inundated with sunseekers

Currently Brits can only go on day trips, but can meet in groups of less than six outside if they maintain social distancing.

Warm weather in recent weeks has led to concerns about increased levels of social contact and a possible second spike in infections.

Anyone who has come into contact with someone who has tested positive for the deadly bug will be told to self-isolate.

But it has been branded a “complete shambles” after trained contact tracers claimed they couldn’t log in on the first day – and weren’t told when they would be starting.

Last night HOAR revealed ‘Hundreds’ of NHS Test and Trace staff who said they were left with nothing to do have been let go.

The scheme launched on May 28 but many have now been released after a week.

Labour have now warned if the Government’s test and trace does not improve there will be no way to track the thousands of people flocking to the beaches.

He said: “Councils are worried this is encouraging people to break the rules themselves and overcrowd the beaches without a track and trace system in place to keep everyone safe.

“The Government needs to get a grip on track and trace quickly. Otherwise, the country risks another catastrophic spike of infection that will lead to a second lockdown with more deaths and job losses across Britain.” I’m A Celeb’s Frankie Bridge reunites with her sons after sparking pregnancy rumours on...