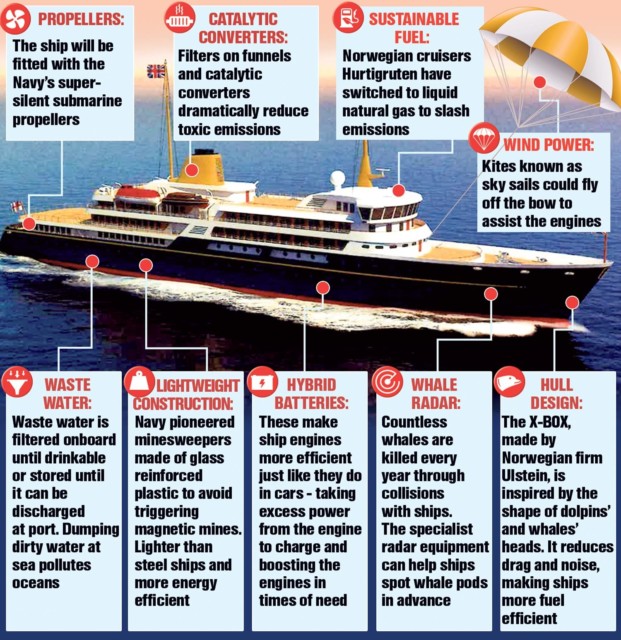 BRITAIN’S new national flagship could run on recycled fish oil and have a special radar to spot whales.

Eco-gadgetry and fuel will be key to the Government’s promise to make it the “greenest ship of its kind”.

The PM says the £250million vessel — with hybrid battery-powered engines — will be a marvel of British-led design that “the world’s top investors will fall over themselves to visit”.

Defence Secretary Ben Wallace has vowed that the ship will be “the greenest of its kind, environmentally and ecologically advanced maximising the use of sustainable fuels and materials”.

The vessel, the successor to the Royal Yacht Britannia, will be used to boost trade and UK interests abroad.

The contract to build it has yet to be signed, but it will be a ship rather than a luxury yacht and be crewed by the Royal Navy.

Critics claim global shipping is an eco-disaster, emitting a billion tons of CO2 a year, polluting the seas with sewage and fuel and killing thousands of marine animals.

Did you miss our previous article…
https://www.hellofaread.com/politics/university-entry-will-be-more-competitive-than-ever-thanks-to-inflated-grades-and-lack-of-courses/

Boris Johnson will ask world leaders to sustain support for Ukraine as he gives...

EastEnders spoilers: Ben Mitchell hatches a plan to set up Danny Hardcastle with the...