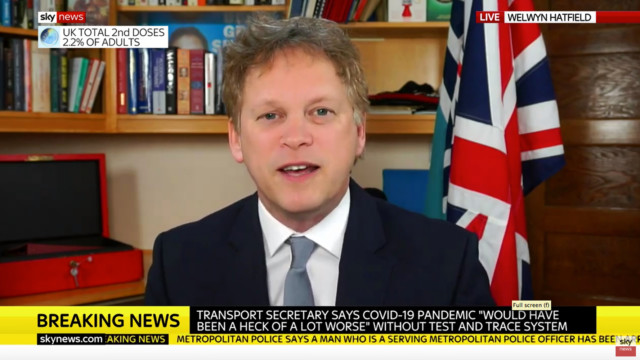 BRITS should hold off on booking their summer holidays abroad until it’s clearer whether the PM’s roadmap out of lockdown is still on track, a senior minister said today.

Transport secretary Grant Shapps warned “we can’t guarantee” international travel will definitely restart on May 17 because the decision will depend on the state of the pandemic.

And he advised people desperate for a break in the sun it would “make sense” to wait until after April 12 – when a panel of experts will report back on how to restart tourism – before making bookings.

His remarks will come as a blow to millions who are already eyeing up a jaunt in warmer climes, with Britain’s vaccination successful vaccination programme causing cases and deaths to plummet.

Mr Shapps told Times Radio: “I’m working on what’s called the global travel taskforce, which will report on the 12th of April and that will set out the route to unlock with regard to international travel.

“What we’ve already said is the unlock for international travel won’t happen until the 17th of May, at the earliest.

“It’s step three of the four part unlock, which means that we can’t guarantee it will be the 17th of May, because that depends on the trajectory of the virus.

“So if you’re thinking of booking, I would say it makes sense to see how the unlock proceeds.

“I’m hopeful, but as with everything to do with this virus, you can’t say for certain. There are a lot of issues that we need to work around.

“But I am working with international partners, both governments and organisations, to try to make it happen. We can’t provide cast iron guarantees on that.”

While there are hopes the PM will allow Brits to head on holidays abroad from as early as May 17, it’s thought that June 21 is a more likely date. Greece, Cyprus, Italy and Turkey are all desperately trying to lure Brits with great holiday deals The transport secretary also warned Europe’s floundering vaccine rollout could have an impact on Brits’ holiday hopes this summer.

He said: “We, in the UK, having had this world leading vaccination going on here, we want the rest of the world to vaccinate as well.

“Europe and the rest of the world, which is going to go back to our conversation before about travel.

“We recognise that other places need to vaccinate as well. It’s in everybody’s interest for the world to vaccinate.”

While the UK has now jabbed more than a third of its entire population, the EU is trailing miles behind on just 9%.

Talks over an EU-wide vaccine passport to reopen travel also risk descending into shambles, with European countries unable to agree on the scheme.

But despite the chaos Greece is forging ahead on its own and has insisted it will open its doors to tourists from May 14.

Greece, Cyprus, Turkey and other top holiday destinations are all desperately trying to lure Brits with great deals this summer.

On Monday the Greek media referred to an all-out ‘war’ to lure tourists from the UK, by far the biggest market for Greece after the Germans.

Greece and the UK are currently in talks over forging an agreement that would allow travellers with vaccination certificates to enter the country without the need for quarantine or Covid tests.

Did you miss our previous article…
https://www.hellofaread.com/politics/ex-chancellor-george-osborne-blasts-rishi-sunaks-plan-to-hike-corporation-tax/