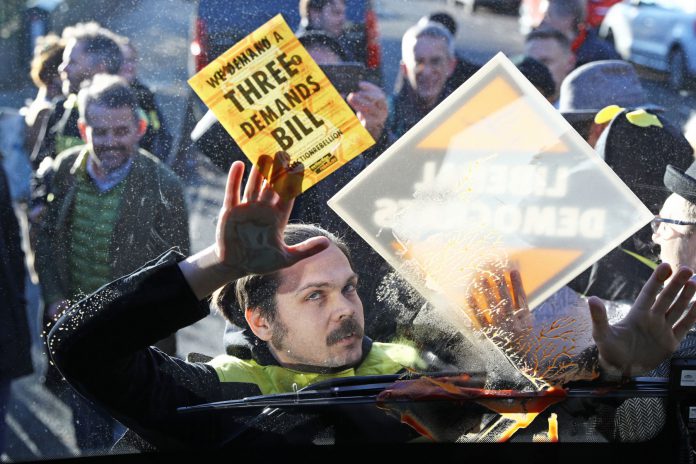 BUNGLING Extinction Rebellion activists glued themselves to the Liberal Democrats election bus this morning, despite it being an eco-friendly electric vehicle.

Pete McCall used super glue to attach himself to the windscreen said “all the parties are being targeted today”.

Extinction Rebellion activist Linda Doyle told the BBC: “Its not the bus were protesting – its the Lib Dems c****y policies.”

The Lib Dem leader was seen speaking with protesters as police arrived to remove the glued activist.

Today’s stunt is going by the name ‘Bee-yond Politics’ to remind candidates “of the irreplaceable biodiversity loss that is a direct result of their poor, irresponsible policy-making”.
The eco-warrior’s attempt to bring attention to climate change was thwarted as they glued themselves to an electric bus.

A video shared on Twitter shows multiple activists pretending to fly around the bus ahead of an event at the Knights Youth Centre in Streatham.

Police arrived shortly afterwards and successfully peeled the climate change protester off the front of the bus.

A Metropolitan Police spokesman said no arrests were made.

Many branded the leftie group as “clowns”.

Another added: “This is an excellent story

And made me smile on an otherwise boring day!”

Lib Dem Shadow Chancellor Ed Davey said: “It is great to see our campaign creating such a buzz around tackling the climate emergency.”

Today’s small demonstration comes two months after the bungling group covered themselves in fake blood when they used a fire engine to spray 400 gallons of red liquid on the Treasury’s Westminster headquarters.

The activists had planned to use a decommissioned fire engine to drench the front of the building with red liquid.

But the stunt backfired as activists misjudged the pressure of the fire hose and let it drop to the ground before showering themselves as they tried to regain control.

Extinction Rebellion said today’s protest was being carried out to highlight the “plight of bees”.

They said: “Activists wanted to plant the plight of bees and other pollinators fully in the minds of the next prime minister and to remind them that they hold the future of life in their hands.

“Our bee population is being threatened by extreme weather and habitat destruction, bringing with it crop instability and food vulnerability.”

Tottenham’s new stadium to be included in Madden 22 NFL game with Falcons and...

Emmerdale spoilers: Nate Robinson proposes to Tracy Metcalfe – as she breaks down over...