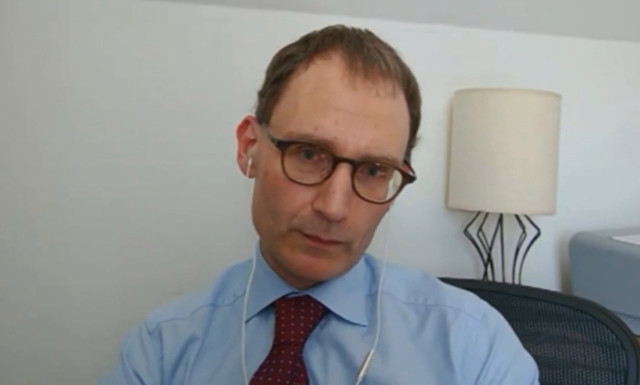 THE doom-forecasting professor who sent the country into Covid-19 lockdown in March has warned Christmas Day will be a “killer”.

Scientist Neil Ferguson, who has repeatedly over-estimated the outcome of outbreaks, predicted loved ones will be at risk if household mixing rules are relaxed on December 25. The boffin, who also reckons the NHS will not able to cope “for much longer” if infections keep rising at their current rate, said PM Boris Johnson will have to decide if potentially catching the virus outweighs seeing relatives.

He said: “It risks some transmission and there will be consequences. Some people will die because of getting infected on that day.

“But if it’s only one or two days the impact is likely to be limited. It’s really a political judgment about costs versus benefits.”

But Tory MP Andrew Bridgen hit back: “You wouldn’t expect much Christmas cheer from Professor Neil Ferguson. Let’s see where we are in December.”

The warning from the epidemiologist, who quit as a government adviser after breaking quarantine to see his lover, came after No10 said it was an “ambition” for families to mark Christmas together.

Asked about his festive plans, he said: “I’m looking for quite a quiet Christmas like many people ­— catching up with friends and family on Zoom more than anything.

“I’m living with my son. I see him basically, nobody else.”

Households must stick to the “rule of six” for mixing indoors in Tier 1 areas. Entering others’ homes is barred in Tier 2. No mixing is allowed in Tier 3.

Scots have been told to prepare for a “digital Christmas”.

Treasury Minister Stephen Barclay said he hoped the public’s ongoing “huge effort” would enable festive family get-togethers. However, Prof Ferguson warned that if the current rate of infection should carry on, the UK could be above the March peak within a month. Tory MP Andrew Bridgen hit back: ‘You wouldn’t expect much Christmas cheer from Professor Neil Ferguson. Let’s see where we are in December’

Prof Ferguson, who has advised five PMs over 20 years, was part of a team at Imperial College whose modelling forecast 510,000 Brits could die in a worst-case Covid scenario.

In 2005, the Oxford-educated expert forecast bird flu could kill 200million. Only 282 died worldwide. In 2009, he told Gordon Brown’s government that swine flu could kill 65,000 Brits. There were 457 fatalities.

He said yesterday that schools may have to close to older children to help stem the spread of infections.

He went on: “There is a limit to what we can do in terms of reducing contacts, short of starting to target, for instance, the older years in schools and sixth-form colleges where we know older teenagers are able to transmit as adults.

“Nobody wants to start moving to virtual education and closing schools even partially. The challenge may be that we’re not able to get on top of the transmission otherwise.”

Prof Ferguson also said that the NHS would be unable to cope if Covid-19 cases continued to rise at their current rate. Despite cases in 18-21- year-olds falling there was a rise in other age groups.

He said: “There are little hints of slowing, for instance in the North East of England, but we are not seeing the sort of slowing that we really need. Prof Ferguson, who quit as a government adviser after breaking quarantine to see his lover, came after No10 said it was an ‘ambition’ for families to mark Christmas together “It is a worrying situation. We now have 8,000 people in hospital with Covid. That is about a third of the level that there were at the peak of the pandemic in March.”

He told the BBC: “If the rate of growth continues as it is, it means that in a month’s time we will be above that peak level in March and that is probably unsustainable.

“We are in a critical time. The health system will not be able to cope with this rate of growth for much longer.”

“We are treating the British public like children in the nursery looking for the bogeyman behind the curtain.”

Domestic abusers who choke partners will face up to five years in jail under...