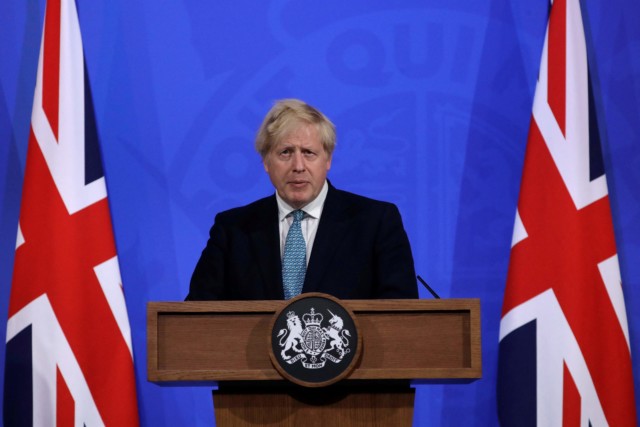 THE chances of full lockdown being lifted on June 21 are “close to nil”, a government adviser has reportedly said.

The final decision on whether to ease restrictions could be delayed until the full extent of the spread of the Indian Covid variant – and the effectiveness of vaccines against it – becomes known. A spike in cases of the variant, has seen it spread rapidly to reach all parts of the UK within matter of weeks.

Downing Street has refused to say if Boris Johnson’s promise to announce an update on post-June 21 plans by the end of the month will still go ahead as planned.

Some ministers and scientist have insisted the full easing of lockdown restrictions that will allow indoor mixing, weddings and clubs to reopen, is still likely to go ahead.

But ITV’s Robert Peston has reported that the chances of that happening are now “close to nil”.

“It is clear some social distancing will have to be retained, not everything we’ve set out for 21 June is likely to happen,” he quoted a government adviser as saying.

“But it is also possible some of the easing we’ve done today will have to be reversed.”

The Indian variant has been spreading among people who have not yet been vaccinated, leading to a jab blitz in areas such as Bolton and Blackburn. The government is waiting on data on the effectiveness of the vaccine against the variant before making a final decision.

Brits began enjoying their first indoor pints of the year as indoor mixing was finally allowed across the country for the first time since November.

Business Secretary Kwasi Kwarteng said the June roadmap target  is “very likely to happen” as vaccines are working against the worrying variant.

And government scientist Prof Graham Medley who sits on SAGE said the chances of a delay to the final end of lockdown was “well less than 50 per cent.”

Officials have said they will give at least a week of notice ahead of June 21 before confirming whether the roadmap will be eased further as planned.

But last week a cautious PM said he wasn’t sure whether he would be able to go ahead with the planned relaxation of all the rules.

The PM’s spokesperson said today: “We want to do it as soon as possible but as I set out we need time to assess the latest data on this very first identified in India.

“So I’m not going to give a set time for doing it.

“Given this change in circumstance, but we want to do everything possible to give people enough time to prepare.”

Did you miss our previous article…
https://www.hellofaread.com/politics/dangerous-porn-loophole-leaves-kids-exposed-to-dodgy-x-rated-videos-online-campaigners-warn/

Two metre social distancing rule ‘to be scrapped by September so schools can reopen...

Serena Williams reveals Meghan Markle flew to the US Open and back in one...