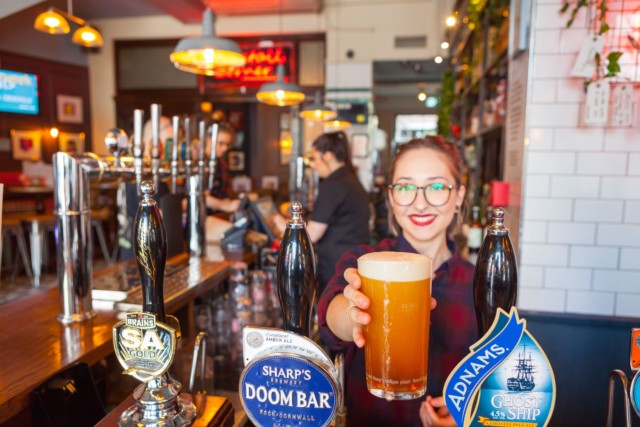 RISHI Sunak has been urged to bring forward a planned cut in beer duty to save at least 3,000 pubs from closure.

The Chancellor announced a five per cent cut for draught sales — knocking an average 3p off a pint.

But it won’t kick in until April 2023 by which time it will be too late to rescue bars left on their last legs by the pandemic.

Covid saw a drop in “drinking” venues of 5.6 per cent but publicans estimate that up to 6,000 are at risk from lockdown debt, higher energy bills and the removal of government support.

There are 105,000 hospitality venues of which circa 40,000 are pubs and about around 75,000 will benefit from the new Draught Beer Duty,
Brewers and publicans estimate that bringing in Draught Beer Duty early could save at least half the pubs at risk and maintain safe supervised environments at the heart of their community.

Tory MP Mike Wood said: “Our community pubs and brewers were hit hard by the pandemic but a lower rate of duty for draught beer will be a big help.

“I hope the Chancellor will look at how he can bring it in sooner than originally announced, and increase the discount, so that our pubs can have a chance to compete fairly with supermarket booze.”

Fellow Tory MP Richard Holden added: “A lower level of draught beer duty is great for our pubs and our communities.

”This is the best way to ensure moderate drinking in a secure space is more affordable.

“The next step is to make the discount even better for on sale trade and I hope that ministers will look favourably on that in time.”

Keith Bott, managing director of Staffordshire-based Titanic Brewery, said: “This fabulous initiative recognises the additional costs incurred by pubs, for instance we employ 18 staff in pubs for every one in a supermarket booze aisle.

“This policy is laser targeted to support pubs and bars and invests in their position as safe, supervised environments at the heart of the community.

“We really need this investment now and urge the Chancellor to bring forward the implementation and to go further than he has already if at all possible.”

Try your hand at our EastEnders quiz to celebrate the soap turning 35 this...

Third of Britains 4.5m small firms will be forced to cut jobs or wages...

Hundreds of thousands of lives at stake over Coronavirus in Britain, ex-Health Secretary Jeremy...