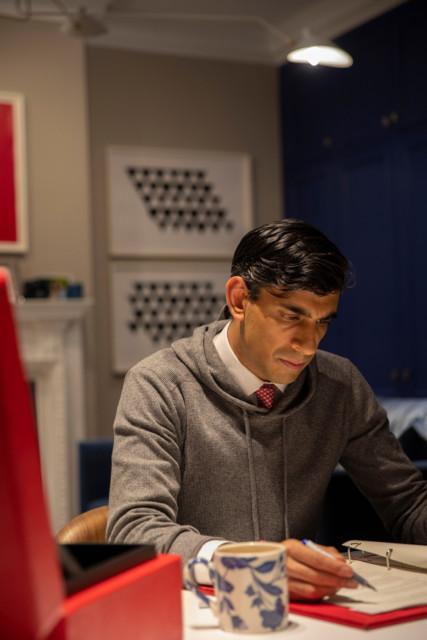 RISHI Sunak has warned the Cabinet of “sobering” financial outlook with billions of pounds of debt set to last for years to come.

The Chancellor said the Office for Budget Responsibility has laid bare the scale of the economic crisis facing the UK as he tries to slash spending to balance the Treasury’s books.

A spokesperson for No10 said: “Cabinet was told the OBR forecasts will show the impact the coronavirus pandemic has had on our economy.

“They will make for a sobering read, showing the extent to which the economy has contracted and the scale of borrowing and debt levels.”

The Chancellor stressed the spending review today would focus on protecting jobs throughout the winter, putting more cash into schools, hospitals and policing and pushing ahead with “levelling up” infrastructure plans.

Figures from the Office of National Statistics said public sector debt hit £2.076trillion at the end of last month – or around 100.8 per cent of gross domestic product (GDP).

The debt to GDP ratio are at their worst level since the early 1960s.

Mr Sunak has had to dish out record sums to keep Britain afloat during the coronavirus crisis.

Last month, he extended the furlough scheme to last through until March as Boris Johnson warned the UK faced a “hard winter” of further coronavirus restrictions.

In the financial year to October, the ONS said the Government had borrowed a staggering £214.9 billion.

And they expected this to reach £373.2 billion by the end of March next year, when the PM has said he hopes restrictions to begin lifting.

Money flowing into Treasury coffers has also dried up, with the amount of cash from tax falling by £38.3 billion as Mr Sunak introduced massive savings on businesses rates and slashed VAT.

Mr Sunak has repeatedly stressed the Treasury will need to find ways to bring back the long-term health of public finances.

But both the PM and the Chancellor have dismissed suggestions it will signal a return to austerity.

In his spending review, Mr Sunak is expected to lay out a raft of cost-cutting measures including freezing public sector pay and cutting the foreign aid target from 0.7 per cent to 0.5 per cent.

The combination of the two measures could save almost £10billion but both face fierce criticism.

Corries Samia Longchambon reveals she has mum guilt as shes so busy filming she...

Who is Maura Higgins and is the Dancing on Ice star still with her...