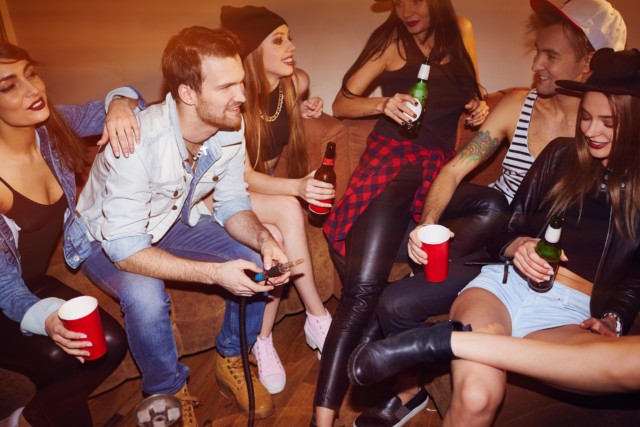 The mixed-messaging of the policy threatens further chaos for police trying to enforce the “rule of six” at after parties as the Government desperately tries to reel in the growing number of coronavirus cases. Police will have to try and enforce “rule of six” The 10pm curfew which will come into force on Thursday will work alongside the rule of six – meaning people can still keep drinking and stay in close quarters as long as there are no more than six people, Mr Gove said.

Speaking to Radio 4’s Today programme, Cabinet office minister Mr Gove, said when asked about after-curfew drinking in homes: “It is the case that with the rule of six you can have six people in a social gathering.

“Yes (people can keep drinking in homes) but the steps that we’re taking here reflects some of the evidence that has been gathered from those parts of the country where these restrictions have already been put in place.”

But yesterday Matt Hancock said most new cases in coronavirus were caught in homes.

He said: “Where people catch the disease tends to be in social settings, people coming round to your house or you going out and socialising.”

Boris Johnson will make a statement at 12.30 in the House of Commons today about the new measures, and a televised address at 8pm.

There has been fury at the new policy from all sides, with MPs attacking it as nonsensical.

Tory chairman of the Commons liaison committee Sir Bernard Jenking said the restrictions would be a “terrible blow” for pubs.

He said the new rules could on be justified if they could prevent the need for a second blow.

“And the lifeline of the bounce-back loans and the grants has kept these people, just about, their heads above water, and this will be a terrible blow to them.”

“What would be the worst case is if we have to have another major lockdown. That would be terrible for the economy.

“And, so anything that can avoid that risk, or mitigate that risk, seems to be justified.”

Publican Adam Brooks, who owns two pubs in Loughton and Buckhurst said it would create chaos with people packing into house parties.

He said: ““Yet again, the pub industry will be hit hard on the back of a box ticked and not on any scientific evidence at all.

“You have just created a house party & rave scenario beyond your wildest prediction models, crazy decision.”

And Liberal Democrat leader Sir Ed Davey said the new rules would “feel like a step backwards”, and urged the Government to fix the track and trace system and help the hospitality sector.

He said: “The Prime Minister must also financially help pubs and restaurants who will inevitably lose business. After people have already been through so much hardship, we cannot allow thousands of jobs to disappear overnight.”

Police have warned the 101 non-emergency number has already been overwhelmed by people snitching on their neighbours for breaking the rule of six, according to The Times.

One senior officer said: “There are discussions about how the 101 system can cope, and whether increased resources need to be looked at across the board.

“We don’t want a situation where people calling about Covid-19 breaches are blocking others from getting through about other serious crimes.”

Gwent police said last week it has been swamped by calls about Covid-19.

Chief Superintendent Mark Hobrough told the South Wales Argus there had been countless calls to the 101 number from people who want to “seek advice or guidance they aren’t breaching the regulations”.

He said: “We’re very much trying to point people to the Welsh government and Public Health Wales sites for up-to-date advice and answers to frequently asked questions.

“It will help us deal with policing demands rather than be tied up in other ways.”

Wetherspoons announced this morning they would be cutting 450 jobs from pubs across the country.

The popular pub chain has written to 1,000 people to inform them that a possible 400 to 450 positions are at risk of redundancy.

Weatherspoons boss Tim Martin lashed out at the Government’s policy saying he had hoped his pubs would be back up to speed.

Mr Martin told Sky News: “We have jumped from pillar to post, from circuit breaking to mingling, to now curfews is the lastest thing.

“It’s utterly stupid. What you have is 3.2 million hospitality workers who are trying to enforce social distancing rules.

“What they’re doing is they’re making those people redundant at 10pm or so in the evening and turning everyone out into the street.

Chief exec of UK Hospitality Kate Nicholls said the curfew was “another crushing blow” for pubs and restaurants.

Ms Nicholls said: “A hard close time is bad for business and bad for controlling the virus – we need to allow time for people to disperse over a longer period.

“It is hard to understand how these measures are the solution to fighting the disease when Government data shows that just 5% of infections out of the home are related to hospitality.

“Where such restrictions have been put in place locally they have not cut infection rates, merely damaged business and cost jobs.” I made $5,000 from playing The Sandbox metaverse game

Universal Credit ‘tax on workers’ should be cut to help Brits get back to...