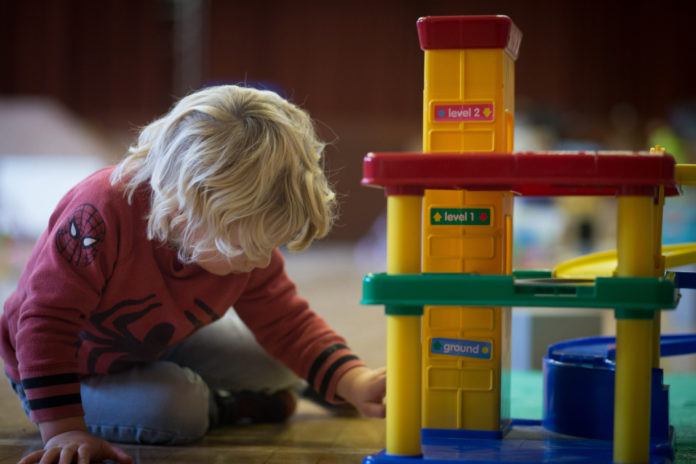 The childcare sector may collapse entirely after the Government backtracked on commitments to cover lost funding and allow nurseries to furlough staff, industry leaders have warned.

Last month the Department for Education (DfE) had assured childcare providers they would continue to receive the payments they receive from the Government’s policy of providing up to 30 hours of free childcare per child.

The move has left Britain’s 24,000 nurseries in chaos

Its guidance told Britain’s 24,000 nurseries that they would also be able to furlough staff on the Coronavirus Job Retention Scheme, which covers 80 per cent of wage costs.

But after an intervention from the Treasury, the DfE was forced to scrap this guarantee of dual financial help to childcare providers.

Its revised guidance advises childcare providers that the more funding a nursery receives from the state to cover its loss of income, the less wage costs it can claim through the Job Retention Scheme.

The changed guidance tells childcare providers that they will only be able to access the Job Retention Scheme “to cover up to the proportion of its paybill which could be considered to have been paid for from that provider’s private income”.

This means that many nurseries won’t be able to get full access to both schemes, as the department’s original guidance suggested.

For example, if a provider receives 40 per cent of its income from government funding, and 60 per cent from other income, the provider can only claim Job Retention Scheme support for up to 60 per cent of their pay bill.

The guidances states that “this would be done by furloughing staff whose usual salaries come to no greater than 60 per cent of the provider’s total paybill”.

The move has left Britain’s 24,000 nurseries in chaos as they had spent the last four weeks budgeting on the wrong financial assumptions.

That in turn has thrown the sector’s 300,000 childcare jobs into question.

In a strongly-worded warning, the head of the Early Years Alliance Neil Leitch, said the changes threaten the future viability of a sector that was already under huge financial strain.

He said: “It is completely unacceptable that having given a clear and explicit assurance to childcare providers that they would be able to rely on financial support from both ‘free entitlement’ funding and the Job Retention Scheme during the coronavirus crisis, the government is now saying that it will be watering down this support.

“Early years businesses will have made significant financial plans and decisions based on the guidance already published, and many will have already started furloughing staff. It is simply too late for the government to start adding new caveats, conditions and limits now.”

He added: “The Treasury needs to urgently rethink its stance on this, and prioritise giving providers the support they need to continue providing care during this incredibly challenging time by ensuring that all settings can fully access both schemes, as the sector was originally led to believe would be the case. Otherwise, when all this is finally over, there may not be a childcare sector left.”

A spokesperson from the Department for Education said: “We have already confirmed that we will continue to fund councils for the free childcare entitlements for the duration of these closures, as we ask settings to remain open where needed for children of critical workers and most vulnerable.

“To support them with this we are relieving some of the burdens on staff during these challenging times, temporarily changing some of the requirements of the Early Years Foundation Stage framework and providing significant financial support, including a business rate holiday for many private providers.

“We have set out further clarity on other support available, including eligibility for the Coronavirus Job Retention Scheme where an employer receives government funding.”

Xbox Game Pass will let you play console games on your PC or laptop...