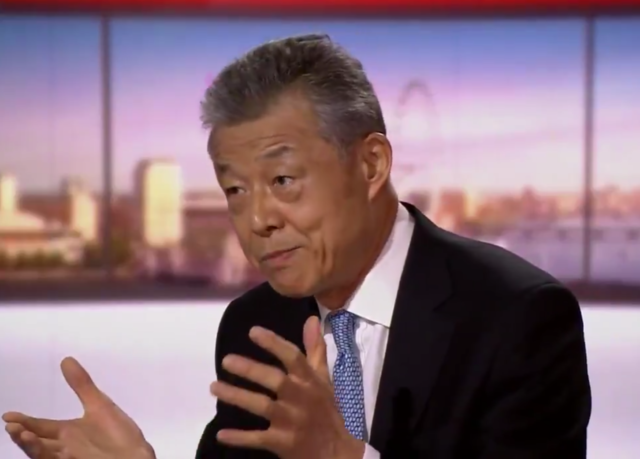 THE CHINESE ambassdor has praised the “beauty” of Xinjinang after being shown a video of blindfolded and shackled Muslim prisoners being forced onto a train.

Liu Xiaoming today repeatedly denied human rights violations against Uighur Muslims in the region despite being shown a shocking video of detainees.

The year-old footage appears to show hundreds of Uighur Muslims waiting to be pushed onto trains in the Xinjiang province.

Appearing on the Andrew Marr show, Mr Xiaoming this morning responded to the shocking footage by discussing how nice the region was.

He said: “I cannot see, this is not the first time you show me.

“But let me tell you this, Xinjiang is regarded as the most beautiful place in Xinjiang.”

The Chinese official then refused to accept the footage showed Muslims being loaded onto trains.

He said: “I don’t know where you get this tape.

“Sometimes there are transfers of prisoners.”

“There is no such concentration camp in Xinjiang.”

The BBC host stated that the tape had been verified by western intelligence agencies after going viral around the world.

“People say we have ethnic cleansing but the population of Xinjiang has doubled in 40 years.”

He also bashed Amnesty International, saying the human rights group were “not respected in China” because they “never say a nice word.” The footage shows up to 600 prisoners being moved in China They’re shackled together, have shaved heads, are blindfolded and have their hands locked behind their backs

Twenty-two nations have signed a letter to the UN Human Rights Council criticising Beijing’s treatment of Uighurs and calling on the Chinese government to “end its mass arbitrary detentions and related violations against Muslims in the Xinjiang region”.

The Chinese Communist Party has previously compared Islam to an “infectious disease”.

It also said in an official recording obtained by Radio Free Asia that “members of the public who have been chosen for re-education have been infected by an ideological illness.”

“Being infected by religious extremism and violent terrorist ideology and not seeking treatment is like being infected by a disease that has not been treated in time, or like taking toxic drugs,” the recording said.

“There is no guarantee that it will not trigger and affect you in the future.”

Queen advised to cancel garden party over coronavirus fears but she vows to carry...