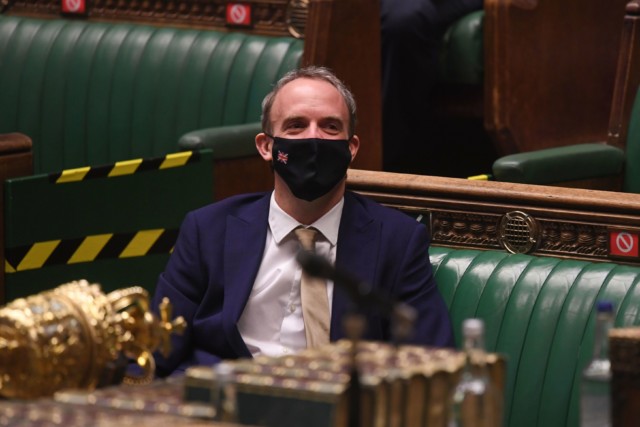 Relations between No 10 and the Chinese leadership were plunged into crisis by the late-night announcement from Beijing.

It comes after the UK joined allies including the US, Canada, and the EU in targeting officials linked to human rights abuses against Uyghur muslims.

In retaliation Beijing has slapped sanctions on China-sceptic MPs, accusing them of spreading false information about the country.

Senior ministers slammed the decision this morning and accused the Chinese leadership of trying to silence international critics.

Foreign secretary Dominic Raab fumed: “It speaks volumes that, while the UK joins the international community in sanctioning those responsible for human rights abuses, the Chinese government sanctions its critics.

“If Beijing want to credibly rebut claims of human rights abuses in Xinjiang, it should allow the UN High Commissioner for Human Rights full access to verify the truth.”

The Chinese government has been accused of carrying out a policy of cultural and ethnic “genocide” against the Uyghur minority.

Beijing has been blasted for trying to silence international critics China is accused of human rights abuses against the Uyghurs

Housing secretary Robert Jenrick said it was “completely wrong” to sanction politicians “who were simply exercising their democratic right in this country”.

He said: “We completely condemn the action we’ve heard from China this morning.

“Knowing those MPs, I doubt they will be silenced or intimidated by this action and the UK certainly won’t step back from its important role in calling out China for its human rights abuses.

“We’ve been leading the world in that respect, at the United Nations and with our international partners, and I know the Foreign Secretary will continue that work.

“We’ve already applied restrictions on certain Chinese individuals and we’re taking action against companies which are importing products into the UK and other markets from those provinces in China.

“That’s the right course and the Foreign Secretary will keep up that work on the international stage.”

Backbenchers Neil O’Brien, Tim Loughton and Nusrat Ghani have also been hit, as has the China Research Group of Tory MPs and the Conservative Human Rights Commission.

Sanctions were also announced against other critics of Beijing including crossbench peer Lord Alton and Labour’s Baroness Kennedy.

Even non-political figures like barrister Geoffrey Nice and Joanne Nicola Smith Finley, a Uyghur expert at Newcastle University, are in the crosshairs. All those sanctioned are banned from entering China, as are their immediate families.

And assets of property they have in the country will be frozen, and they will be unable to do business with Chinese firms.

But the group were today unbowed by Chinese threats, with Mr Duncan Smith saying he would wear the sanctions as “a badge of honour”.

He added: “It’s our duty to call out the Chinese Government’s human rights abuse in Hong Kong and the genocide of the Uyghurs.

“Those of us who live free lives under the rule of law must speak for those who have no voice.

“If that brings the anger of China down on me, I’ll wear that badge of honour.”

“China puts sanction on for individuals who defend the human rights of Chinese citizens. The contrast is clear.

“If you’re thinking of doing business with China, think hard.”

And Ms Smith Finley vowed: “I have no regrets for speaking out, and I will not be silenced.”

Did you miss our previous article…
https://www.hellofaread.com/politics/boris-johnson-can-create-staggering-1-7million-new-jobs-in-his-green-revolution-experts-claim/

Love Island’s Jack Fincham under fire from fans after buying a dog with clipped...

Prince Harry & Meghan must get a grip – do they really think their...

Madden bug sees you play American Football INSIDE the office