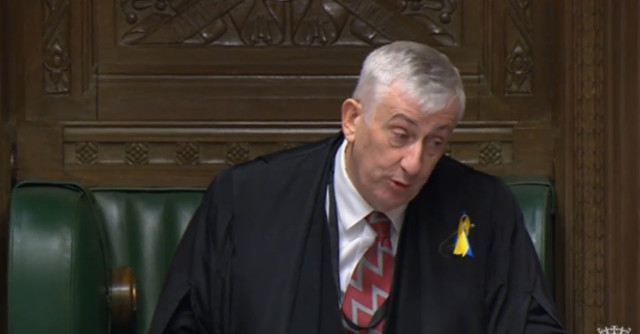 THE Commons Speaker has called for “kinder” politics after Angela Rayner said she had been a victim of “disgusting” sexist briefings.

Lindsay Hoyle urged reporters to consider the feelings of MPs and their families before writing about them.

Commons Speaker Lindsay Hoyle has called for ‘kinder’ politics after Angela Rayner said she had been a victim of ‘disgusting’ sexist briefings
An article in the Mail On Sunday claimed Labour deputy leader Angela Rayner was trying to distract Boris Johnson in the Commons by crossing and uncrossing her legs in a ‘Basic Instinct’ plot.

He triggered alarm over press freedom by calling in editors at the Mail on Sunday to explain a story.

An article claimed Labour deputy leader Ms Rayner was trying to distract the PM Boris Johnson in the Commons by crossing and uncrossing her legs in a “Basic Instinct” plot.

The claims from an anonymous Tory MP sparked outrage across the political spectrum.

The PM labelled the article “the most appalling load of sexist, misogynist tripe”.

But concerns were also raised by suggestions the Speaker might strip the ­journalist who reported the remarks about Ms Rayner of his Parliamentary pass.

Last night Mr Hoyle insisted he backed journalists to report what they were told.

He said he was a “staunch believer and protector of press freedom”. He did not want to see Commons passes ripped off journalists for writing things that MPs didn’t like.

But he added: “I would just ask that we are all a little kinder.”

EastEnders drops new clue Sharon and Phil will take over the Queen Vic from...

Who is Tom Parker from The Wanted?

Coronation Street spoilers: Debbie Webster clashes with Abi Franklin as she returns to the...