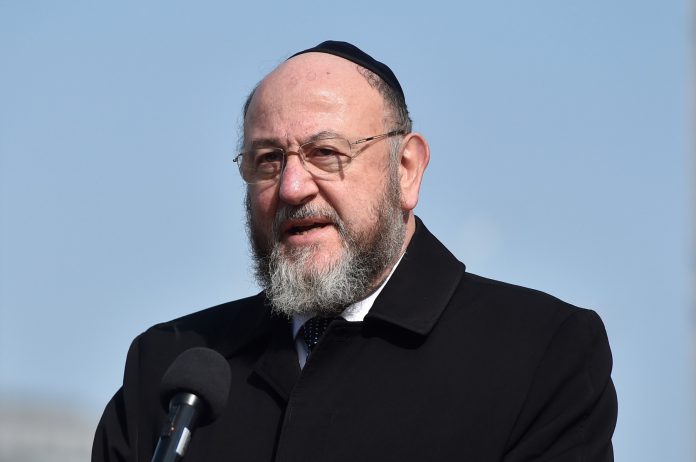 THE Chief Rabbi has been bombarded with abuse after saying Jeremy Corbyn is unfit to be prime minister.

Ephraim Mirvis wrote that the majority of British Jews live in terror of the Labour leader winning the election.

Chief Rabbi of the United Hebrew Congregations of the Commonwealth Ephraim Mirvis issues warning about a labour win.

He wrote in The Times that the overwhelming majority of British Jews are gripped by anxiety at the thought of Corbyn getting into Number 10 on December 12.

But after his article was made public he faced an onslaught of attacks on Twitter from Corbynistas accusing him of being being paid and dual loyalty.

“Hes also an uncritical supporter of Netanyahu + the violent oppression of Palestinians by Israel.

“Labour is promising to recognise a Palestinian state + end arms sales to Israel.

“His comments must be taken in this context.”

Another accused him of of being a Mossad agent claiming: “Todays announcement from the chief Rabbi also stinks of foreign state interference, MI6 Monday, Mossad today! CIA tomorrow? Corbyn is target number 1.”

A further tweet suggested that the rabbi’s concerns were “all about support for a certain settler-colonial state”. Writing in The Times, he states the Jewish community has watched with incredulity as supporters of the Labour leadership have hounded parliamentarians, members and even staff out of the party for challenging anti-Jewish racism.

He adds: The way in which the leadership has dealt with anti-Jewish racism is incompatible with the British values of which we are so proud of dignity and respect for all people.

He urges every person to vote with their conscience.

He then adds: Be in no doubt, the very soul of our nation is at stake.

The Jewish leader was then bombarded with abuse from Twitter accounts claiming to support Corbyn, accusing him of being paid and of dual loyalty.

The Archbishop labelled his claims”unprecedented”.

Justin Welby said this morning: That the Chief Rabbi should be compelled to make such an unprecedented statement at this time ought to alert us to the deep sense of insecurity and fear felt by many British Jews.

Voicing words that commit to a stand against antisemitism requires a corresponding effort in visible action.”

Mr Mirvis claims at least 130 outstanding anti-Semitism cases are being looked at by Labour and thousands more have been reported but remain unresolved.

A Labour spokesman said: Jeremy Corbyn is a lifelong campaigner against anti-Semitism and has made absolutely clear it has no place in our party and society.

The 130 figure is inaccurate and it is categorically untrue to suggest there are thousands of outstanding cases.

Tactical voting what is it and how does it work in the election?

Ryan Reynolds and Rob McElhenny are in FIFA 23

Curtis Pritchard cosies up to a mystery woman as he leaves London nightclub with...