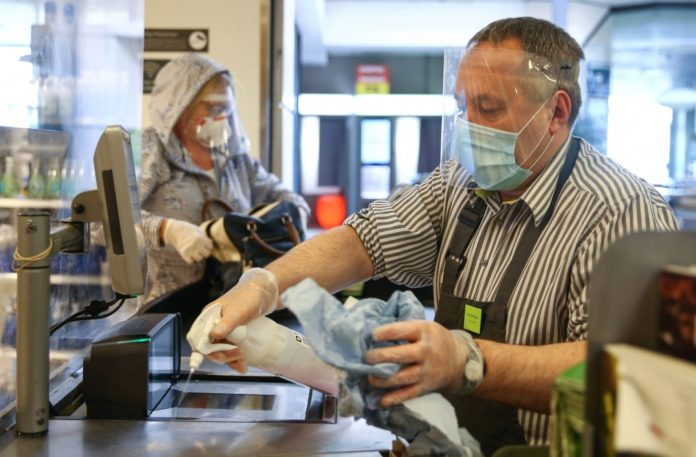 The Government has already admitted it is grappling with a global shortage of protective kit, and a rush on facemasks could make it worse.

Everyone could be told to wear masks

Government scientists are re-examining evidence about the wearing of masks today, before making a formal recommendation.

But while the NHS is still under incredible pressure trying to protect their workers with inadequate levels of personal protective equipment (PPE), any change in advice could be dangerous for the health service.

Ministers have been urged not to recommend masks to the public unless there is “clear evidence” that benefits outweigh the risk to the health service.

Chief exec of NHS Providers, which represents NHS trusts, Chris Hopson said: “Securing the supply of masks, when there is huge global demand, is crucial. This must be a key consideration.”

“If the Government is going to consider advising the general public to wear facemasks it must fully assess the impact on the NHS.”

“Fluid repellent masks for health and care staff are key to safety and to avoid the spread of coronavirus.”

“There needs to be clear evidence that wearing masks, along with other measures, will deliver significant enough benefits to take us out of lockdown to potentially jeopardise NHS mask supply.”

The World Health Organisation has already warned that advising widespread use of face masks would divert critical resources away from overstretched health services.

Their guidance says: “the wide use of masks by healthy people in the community setting is not supported by current evidence and carries uncertainties and critical risks” including “diversion of mask supplies and consequent shortage of masks for healthcare workers”.

But it is understood the WHO is gearing up to issue fresh guidance on wearing them in shops, on public transport and in other crowded spaces as part of measures to help begin to ease lockdowns.

Local Government Minister Simon Clarke told Sky News this morning: “We will always be guided by the science on decisions like (facemasks).”

“Obviously we would prioritise the NHS frontline as the core recipient of PPE at a time when we all know there is such demand for it.”

“There is no consensus that wearing masks in public is the appropriate way forward.”

Scientists and doctors have urged ministers to back the use of homemade masks or non-clinical ones.

London Mayor Sadiq Khan and former PM Tony Blair have both added their voices to the calls for masks.

But there is a concern that any endorsement of masks would encourage people to buy medical grade versions – raising prices and depleting already-stretched stocks.

Public Health England said last night staff had the right to refuse to work if they did not feel safe because of lack of protective kit.

PHE’s medical director Yvonne Doyle said last night, “staff have to make their decisions based on whether they are in a risk situation or not”, as the desperate calls for adequate PPE grew even louder.

Hospitals are reported to be laundering and reusing single-use gowns up to three times because they need around 150,000 a day to work safely and do not have the stocks.

NHS bosses began to lose hope over the weekend, after the promise of an 84-tonne shipment of PPE stalled in Turkey.

Mr Hopson said he had “low confidence” in the supplies arriving.

No10’s chief scientific adviser Sir Patrick Vallance has said the evidence on masks is “variable” but there is evidence that wearing masks stops people spreading the virus to others, rather than protecting themselves.

Other European countries have added facemasks to the arsenal of measures being brought in to stop the spread while easing lockdowns.

The German state of Saxony has made them compulsory in shops and on public transport, and Spain is giving them out to commuters. A woman wearing a face mask on the Tube Masks can prevent people giving the virus to others The NHS is running low on crucial PPE supplies EastEnders’ Maisie Smith shows off her impressive toned stomach in a crop top and...

Jeremy Corbyn says ISIS chief al-Baghdadi should have been arrested and casts doubt on...

Im A Celebrity 2019: Ian Wrights wife insists he isnt a bully after lashing...