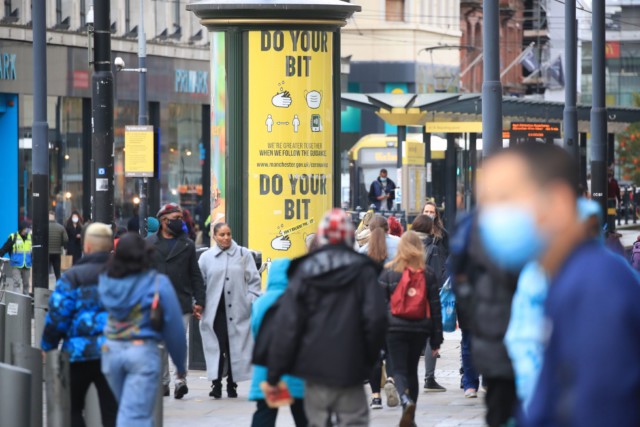 CORONAVIRUS is becoming “out of control” again in the UK and new measures are needed to tackle it, a minister admitted last night.

Skills minister Gillian Keegan told BBC Question Time that the huge rise in cases as “serious” and “we have to do something”. It came as scientists on the Government’s SAGE committee of experts called for more stringent measures to tackle the spread of the virus across Britain.

Ministers are now increasingly worried about the effect on hospitals as admissions rise along with deaths.

Ms Keegan said last night: “This is serious, it is getting out of control, and we have to do something to bring it back under control.”

Boris Johnson is mulling new measures for the North of England – with cities including Manchester, Liverpool and Newcastle expected to see pubs shut from next week.

But there’s a huge divide across the country with areas in the South not seeing the same increases in cases like areas further North.

MPs have been shown data which claimed up to 30 per cent of coronavirus “exposure” is in hospitality.

But Public Health England data shows it’s only responsible for a handful of outbreaks across the country.

Experts have said, however, that even shutting hospitality venues and risking more jobs will might not be enough to curb the virus.

Sir Jeremy Farrar called for immediate action “to avoid spiralling out of control”.

“With the lag time between making a decision, its implementation & its effect measured in weeks the longer the decisions are delayed the harder & more draconian are the interventions needed to change trajectory of epidemic curve.

“Don’t act slower than the speed of the epidemic, don’t get behind an epidemic curve.”

Some are urging the PM to go for tougher measures to get a grip on cases again. Gillian Keegan said the situation was getting serious

No announcement has yet been made on more local lockdown measures, but leaders are furious they haven’t yet been told what’s going on.

The PM is expected to reveal a new tiers system next week which will separate the country into different lockdown measures depending on the infection rate.

The highest case numbers are expected to see venues shut down completely.

Greater Manchester mayor Andy Burnham, who said he would challenge any closures without a full furlough scheme paying people’s wages in place.

He raged: “I will use whatever means I can to challenge it to get support for people because otherwise they are going to suffer real hardship this winter, we are going to see businesses failing.”

The latest ONS data looks grim for the nation – with the rate of infection doubling in the last week.

This is up from the previous week where 8,400 cases were recorded and the ONS stated that infections in teenagers and younger adults are also rising.

This is up from the previous week where 8,400 cases were recorded and the ONS stated that infections in teenagers and younger adults are also rising. A No10 spokesperson said this lunchtime: “We will continue to keep all that data under review and won’t hesitate to act in order to protect communities and save lives.”

Downing Street were unable to say if any new lockdown measures are being brought in, or when they might come.

Family Christmas should be ON but New Year will likely bring harsher Covid restrictions,...

Meghan Markle LATEST – ‘Queen should have been told about Oprah’ claims royal expert...

London Bridge hero who tackled terrorist could be freed from jail in weeks thanks...

When is Love Island star Camilla Thurlow’s baby due?